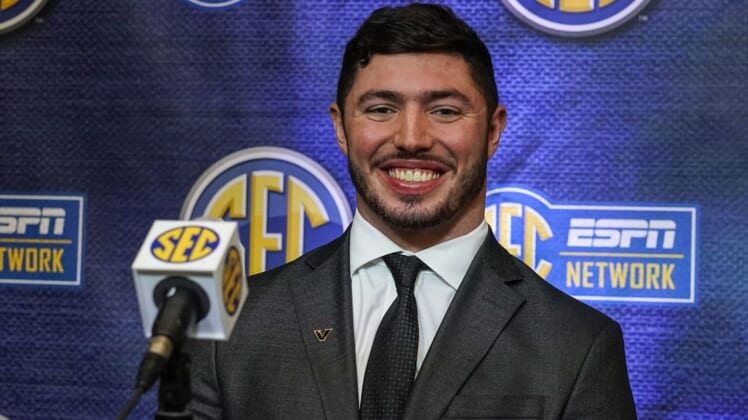 A Hawaii football legend adds another milestone on Aug. 27 in Honolulu when former record-setting Rainbow Warriors quarterback Timmy Chang coaches his alma mater in the 2022 season-opener against the Vanderbilt Commodores.

Chang’s debut as head coach marks the end of a tumultuous offseason for Hawaii, which parted ways with Todd Graham after going 11-11 in just two seasons. Graham resigned in January following allegations of mistreatment from players and an investigation by the state Senate.

Chang – who became the NCAA’s career passing yardage leader while at Hawaii in 2004 – said in his media availability following Aug. 16 that the goal for the new-look Rainbow Warriors is “for them not to be surprised [in] the first game.”

“This will just be an ongoing process every week as we go through,” he said. “But we’re trying to get all of our guys to the race on Saturday.”

For visiting Vanderbilt, the Week 0 matchup marks the beginning of the program’s second season under coach Clark Lea.

The former Notre Dame defensive coordinator helped the Fighting Irish to a pair of College Football Playoff appearances in the 2018 and 2020 seasons, and at July’s Southeastern Conference media days said his goal is to lead the league’s longtime cellar-dwelling program to “become a dominant force within the conference.”

However, the Commodores must first improve from a 2-10 finish to Lea’s debut season.

Vanderbilt finished 2021 with the worst scoring offense among all Power Five-conference teams, and third-worst overall in the Football Bowl Subdivision, at 15.8 points per game. The Commodores allowed the third-most points per game of any Power Five program at 35.8.

While a high point of Vanderbilt’s previous season came in a visit to Mountain West Conference country – the Commodores knocked off Hawaii’s league counterpart Colorado State in Week 2, 24-21 – an opening-game slip-up against East Tennessee State foreshadowed struggles to come.

Avoiding a similar first-game setback is the priority of a Commodores side seeking the program’s first winning record since 2013.

“Leadership … and experience,” linebacker Ethan Barr said of how the team has improved from a year ago. “Also, I think we have a lot of speed. The back end is pretty fast.”

The speed of the Vanderbilt secondary can expect to be tested against a Hawaii program long defined by its high-volume passing offense. Chang rewrote record books in a run-and-shoot system – the same offense the Rainbow Warriors rode to their first-ever Mountain West Championship Game under Nick Rolovich in 2019.

Chang returns to Hawaii with air-raid offensive credentials after having coached tight ends and wide receivers under Jay Norvell at Nevada the previous five seasons.

No doubt the Rainbow Warriors will throw, but the lingering question centers around his preference at quarterback. Chang has not yet named a starting quarterback, though 2021 reserve Brayden Schager has experience.

Schager helped Hawaii to a high mark in its 6-7 campaign with two touchdown passes in an upset of Fresno State. However, he was intercepted four times the next game against Nevada.