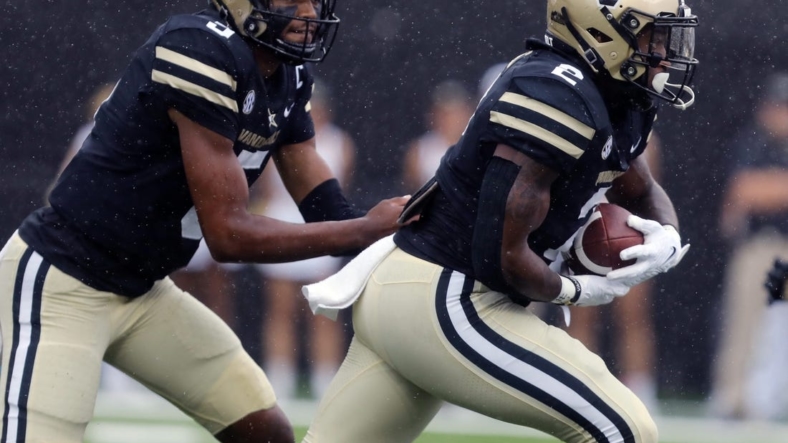 AJ Swann passed for 255 yards and two touchdowns as visiting Vanderbilt scored 24 straight points in the second half on its way to a 38-28 victory against Northern Illinois in a nonconference game Saturday.

Swann completed 18 of 28 passes and two of his touchdowns went to Will Sheppard, who caught 10 passes for 171 yards and has seven touchdown catches for the season. Ray Davis added 116 rushing yards, a rushing touchdown and a touchdown reception for the Commodores (3-1).

Ethan Hampton passed for 124 yards and two touchdowns with one interception and Rocky Lombardi passed for 79 yards and one touchdown for the Huskies (1-2).

Hampton and Cole Tucker teamed on a 70-yard touchdown pass on the first possession of the third quarter to increase Northern Illinois’ lead to 28-14.

On fourth and 4, Swann threw a 21-yard touchdown pass to Davis to get Vanderbilt within 28-21 midway through the quarter.

On the Commodores’ next offensive play, Swann connected with Sheppard on a 31-yard touchdown pass that tied the score.

Swann made it three touchdown passes in less than six minutes when he hit Sheppard for a 13-yarder that gave Vanderbilt a 35-28 lead at the end of the period.

Joseph Bulovas kicked a 35-yard field goal to increase the led to 38-28 early in the fourth quarter.

The Commodores drove 80 yards in 12 plays on the game’s first possession as Swann threw a 3-yard touchdown pass to Gavin Schoenwald.

The Huskies answered on the ensuing possession as Lombardi threw a 1-yard touchdown pass to Tucker that tied the score at the end of the first quarter.

Northern Illinois made it four touchdowns in as many possessions as it drove to tie the score on a 4-yard touchdown pass from Hampton to Kacper Rutkiewicz.

After the scoring streak ended with a Commodores punt, Antario Brown ran 51 yards for a touchdown with 37 seconds left to give the Huskies a 21-14 halftime lead.