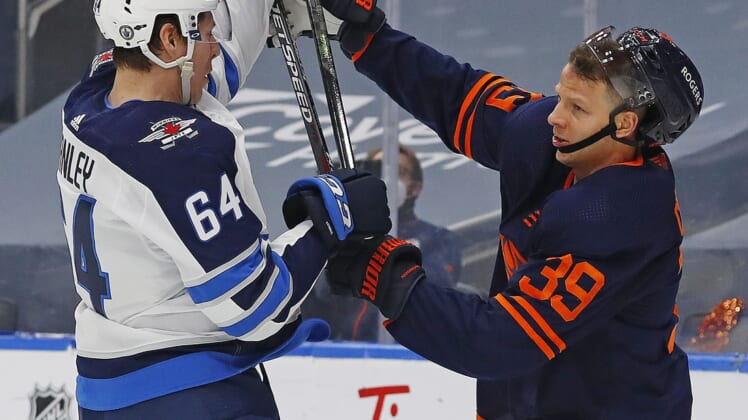 May 21, 2021; Edmonton, Alberta, CAN; Winnipeg Jets defensemen Logan Stanley (64) and Edmonton Oilers forward Alex Chiasson (39) battle for position during the first period in game two of the first round of the 2021 Stanley Cup Playoffs at Rogers Place. Mandatory Credit: Perry Nelson-USA TODAY Sports

The Vancouver Canucks on Tuesday signed free agent forward Alex Chiasson to a one-year deal worth $750,000.

Chiasson, 31, played in four preseason games with the Canucks after signing a professional tryout contract with the team in September.

“Alex is an established veteran who plays a physical game and brings a valuable net-front presence to our team, particularly on the power play,” Canucks general manager Jim Benning said in a statement. “He’s a bigger player that doesn’t shy away from the tough areas of the ice and has fit in well with the rest of our forward group so far.”

He won a Stanley Cup title with the Capitals in 2018.