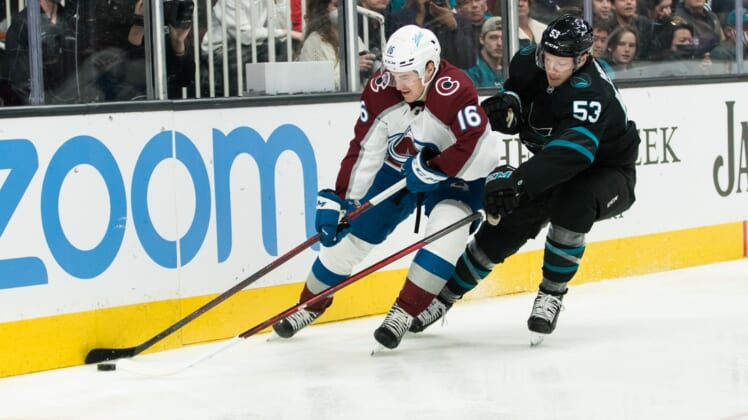 Valeri Nichushkin scored two goals and Cale Makar had a goal and two assists to lead the visiting Colorado Avalanche to a 5-3 victory over the San Jose Sharks on Friday.

Nazem Kadri and Darren Helm also scored goals, Nathan MacKinnon dished out three assists and Paval Francouz made 25 saves for Colorado which won its third straight game. Mikko Rantanen also had two assists for the Avalanche who now have 93 points, tops in the NHL.

San Jose, playing the second game of a back-to-back that began with a 3-0 loss at Los Angeles on Thursday, appeared to take a 1-0 lead early in the first period when Logan Couture jammed in a rebound of his own shot. But the goal was taken off the board when Colorado correctly challenged that Couture had preceded the puck into the zone.

The Avalanche then took a 1-0 lead at the 10:18 mark on a power-play goal by Kadri who redirected Rantanen’s shot over Sawchenko’s right shoulder for his 23rd goal of the season.

Colorado made it 2-0 when Andre Burakovsky poked the puck away from Karlsson in the slot area and Helm scooped it up and then roofed a shot over Sawchenko’s glove for his fifth goal of the season.

Makar extended the lead to 3-0 just 34 seconds into the second period when he fired in his own rebound from the bottom of the right circle for his 22nd goal of the season, tops for all defensemen in the NHL. Nichushkin followed at the 15:29 mark when he buried a Makar crossing pass into the left side of the net on a delayed penalty.

Viel snapped a seven-period shutout streak by the Avalanche with 40.7 seconds left in the period when he deflected Marc-Edouard Valsic’s slap shot from the left point past Francouz’s glove side for his third goal of the season.

Balcers cut it to 4-2 with 6:58 remaining when he fired a wrist shot from middle of the right faceoff dot through Francouz’s pads for his seventh goal of the season.

With Sawchenko off for an extra attacker, Karlsson made it 4-3 with his ninth goal of the season with 1:25 to go but Nichushkin sealed the win for the Avalanche with an empty net goal with 14.3 seconds remaining.