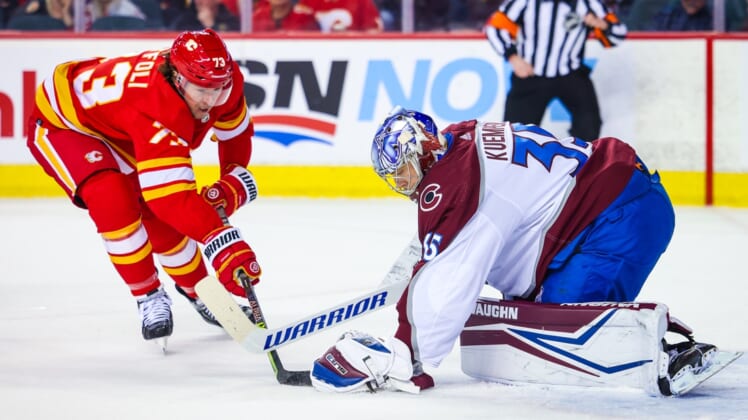 Valeri Nichushkin scored both goals on the power play to lead the Colorado Avalanche to a 2-1 road victory over the Calgary Flames in a clash between the Western Conference’s top teams on Tuesday.

The Central Division-leading Avalanche are the first team this season to reach 100 points; they are 12 points ahead of Calgary.

Devon Toews collected two assists and goaltender Darcy Kuemper made 44 saves for the Avalanche, who found out in the morning they would be without star forward Nathan MacKinnon due to an upper-body injury suffered in the previous outing. The Avalanche are also missing a handful of other key players, including captain Gabe Landeskog.

Tyler Toffoli scored for the Pacific Division-leading Flames, who received a 28-save outing from Jacob Markstrom.

Toffoli’s power-play marker broke the scoreless deadlock just before the midway point of the second period.

While the Flames were enjoying a five-on-three advantage, Toffoli set up shop just inside the left circle and unloaded a one-timer that found the net. It was his 18th goal of the season and ninth in 21 games since being acquired by Calgary.

Nichushkin turned the tide with a power-play goal at 13:46 of the second period. The big forward was set up in the slot and neatly deflected Cale Makar’s point shot to even the count. Makar became the third defenseman in franchise history to collect 50 assists in a season.

From there, the Avalanche kept the momentum, and Nichushkin’s second man-advantage marker of the night at 10:52 of the third period held up as the winner. He was parked at the doorstep and redirected Mikko Rantanen’s shot-pass for his 19th goal of the campaign.

Despite a huge push in the final minutes, the Flames couldn’t find the equalizer, wasting a strong first half of the game in the process.