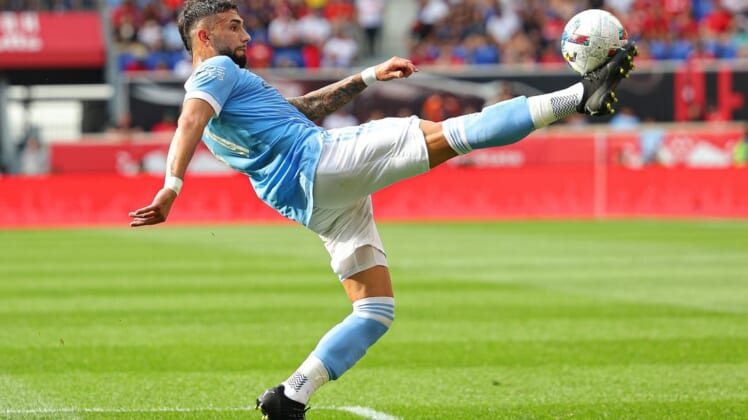 Valentin Castellanos leads the MLS in goals and is committed to guiding New York City FC to the top of the Eastern Conference — for now.

Rumors are swirling about the forward being on the verge of a transfer to a European team, but he is expected to suit up Saturday night when NYCFC host Inter Miami CF at Yankee Stadium.

NYCFC (11-4-5, 38 points) are one point behind the Philadelphia Union for first place in the East and enter Saturday with a 3-0-2 record in their past five games.

Castellanos has scored in four straight games and netted the game-winning goal in the 69th minute of Sunday’s 1-0 win over the host New York Red Bulls.

“We’re aware of the speculation and we understand the speculation because of the player that Taty is,” NYCFC interim head coach Nick Cushing said. “I think it’s fair to say it could be his last game because everyone’s talking about the interest.

“For me, he trained this morning. He trained really well. He’s really motivated. He’s really hungry to help the team win against Miami. He really wants to score.”

Inter Miami (7-9-4, 25 points) are two points behind FC Cincinnati for the final playoff spot in the East and are attempting to end a six-game road winless skid (0-4-2). Miami also is seeking consecutive wins for the third time this season after earning a 3-2 victory over visiting Charlotte FC last Saturday.

Emerson Rodriguez netted the game-winning goal in extra time when he scored in the 93rd minute. Robert Taylor and Gonazlo Higuain also scored as Miami scored three goals for the second time this season.

“We need to pick up points away from home, so we’re going to come in there with intensity and we’re going to try to (get all three points),” Miami defender Ryan Sailor said. “We’re always preparing for every scenario. It’s a very important time.”