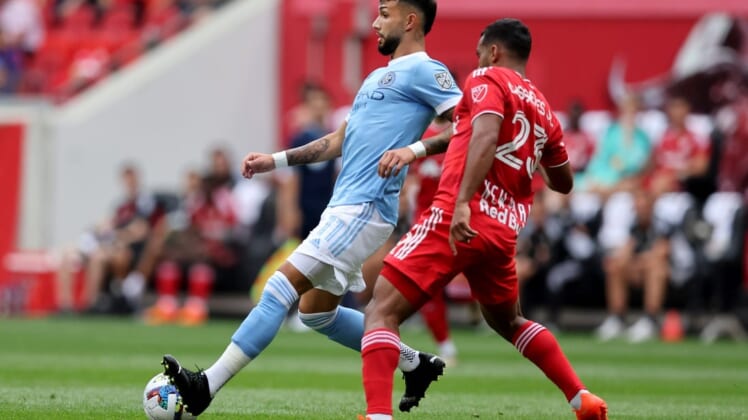 Valentin Castellanos scored for the fourth straight game in the 69th minute and New York City FC held on for a 1-0 victory over the host New York Red Bulls Sunday in Harrison, N.J.

NYCFC (11-4-5, 38 points) remained in second place in the Eastern Conference and moved five points ahead of the Red Bulls (9-6-6, 33 points). The defending MLS Cup champions drew within one point of conference leader Philadelphia.

Castellanos helped NYCFC get its third straight win when he slipped by Red Bulls defender Sean Nealis in the middle of the box. Castellanos got a long pass from Santiago Rodriguez and finished off the sequence by putting a right-footed shot into the center of the net.

It was the 23-year-old forward’s 13th goal of the season and his sixth over the past four games.

New York nearly tied the game in the final minutes, but Cameron Harper missed the net and Johnson denied Nealis.

Red Bulls goalkeeper Carlos Coronel made six saves and kept it a one-goal game by punching away a header by Maxi Moralez in the 88th.

NYCFC had ample chances to get the lead in the final moments of the first half. Rodriguez’s right-footed shot was saved in the 44th minute — five minutes after Castellanos missed the net.

Shortly before Castellanos was off target, Johnson made stops on Luquinhas and Omir Fernandez in a span of a minute to keep things scoreless.