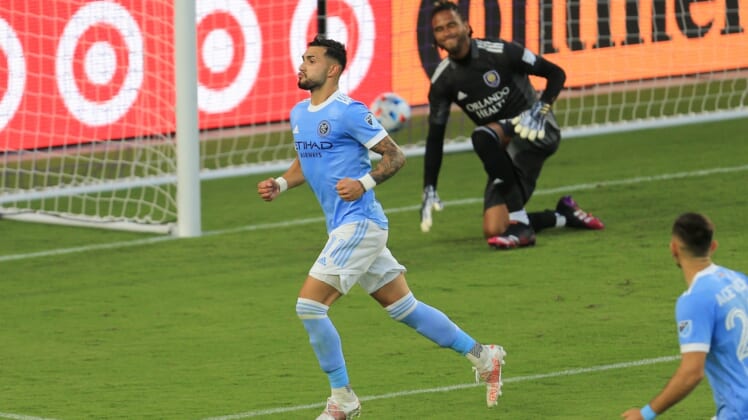 Valentin Castellanos became only the fifth player in MLS history to score in each of his team’s first four matches of the season, converting a 77th-minute penalty to lift visiting New York City FC to a 1-1 draw against Orlando City on Saturday.

Castellanos’ goal helped NYCFC (2-1-1, 7 points) overcome the absence of a late injury to playmaker Maxi Moralez in the buildup to the match.

Substitute Ismael Tajouri-Shradi earned the penalty, which Castellanos converted for his fourth goal of the season to run NYCFC’s modest unbeaten run to three games.

Nani scored earlier in the second half for Orlando (1-0-3, 6 points), which remains unbeaten despite scoring only five goals in its four matches so far this season.

Mauricio Pereyra provided his first assist of the season in his second game back after serving a two-match suspension to start the campaign.

But for the first time this season, Orlando gave back a lead in what was already their third home match of the year.

Orlando defender Ruan left the match at halftime due to an injury and was replaced by Joao Moutinho, who committed the penalty infraction.

After a somewhat plodding first half, the match came to life in the second 45 minutes, with Orlando having the better of play.

Nani gave the Lions the lead in the 52nd minute, taking Pereyra’s pass, cutting inside to his right and then curling a wonderful, right-footed strike from the penalty arc beyond Sean Johnson’s dive and inside the right post.

For a time, Orlando looked the more likely side to score again with Pereyra curling his own effort just wide of the right post.

But the Cityzens coped with the pressure, then leveled when the substitute Tajouri-Shradi got into the box and lured Moutinho into a clumsy challenge.

Castellanos stepped up and converted a tidy finish inside the right post as goalkeeper Pedro Gallese dove the other direction.

The visitors had the best chance to win it late, but Gallese denied Jesus Medina’s breakaway deep in stoppage time.