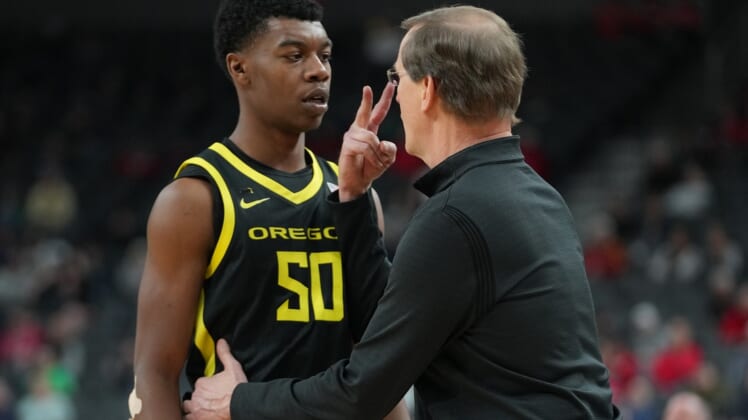 Oregon’s season didn’t end the way the Ducks had hoped, but the team’s season lives on at least one more night with a first-round National Invitation Tournament game at Utah State on Tuesday night in Logan, Utah.

The Ducks (19-14) lost six of their last eight games, including a Pac-12 Tournament quarterfinal matchup against fellow NIT participant Colorado last Thursday in Las Vegas. Utah State (18-15) was knocked out in the Mountain West tournament by then-No. 23 Colorado State on Thursday.

This will be the sixth meeting between the teams all time and the first since 1965. Oregon has a 3-2 advantage in head-to-head matchups.

Oregon hopes to get leading scorer Will Richardson back from a non-COVID illness, but head coach Dana Altman said Monday that he didn’t have a status update.

“It’ll be a big challenge for us, and they’re very good at home,” Altman said of the Aggies.

Utah State has not been to the NIT since 2008 and is hosting an NIT game for the first time since 2004 and fourth time in school history. The Aggies are 0-4 all-time in NIT games at home and their last NIT win was in 1960.

The Aggies are a No. 4 seed on their side of the bracket, while the Ducks are the fifth seed. The winner likely will draw No. 1-seed Texas A&M, which was left out of the NCAA Tournament field of 68 despite advancing to the SEC tournament title game.

Utah State hasn’t played host to a Power Five conference opponent since the 2013-14 season, when it defeated Mississippi State and Southern California.

“Our metrics are our metrics. The numbers are our numbers. Our team scheduled well and performed well against good teams,” Aggies first-year head coach Ryan Odom told the Deseret News. “We just didn’t beat enough of those good teams.”