May 29, 2021; Memphis, Tennessee, USA; Utah Jazz guard Mike Conley (10) drives to the basket during the fourth quarter during game three in the first round of the 2021 NBA Playoffs against the Memphis Grizzlies at FedExForum. Mandatory Credit: Petre Thomas-USA TODAY Sports

The Utah Jazz are preparing to make a run at retaining point guard Mike Conley, who is about to become an unrestricted free agent.

Reports peg Utah’s offer to be an estimated $75 million over three years for Conley, who was named an All-Star for the first time in his career last season. 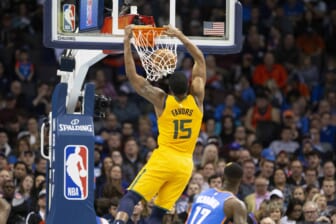 Conley has spent two seasons in Utah after being a stalwart of the Memphis Grizzlies for 12 seasons. He made $34.5 million last season in that final campaign of a five-year, $152.6 million deal he signed with the Grizzlies.

Utah is weighing the offer for Conley as part of its quest to keep its top three players intact after posting the top record (52-20) in the NBA last season. Fellow All-Stars Donovan Mitchell and Rudy Gobert are the club’s leading players.

The Jazz reduced some payroll earlier Friday by shipping veteran power forward/center Derrick Favors to the Oklahoma City Thunder. Favors is owed roughly $19.9 million over the next two seasons as part of a three-year, $29.1 million deal he signed last November.