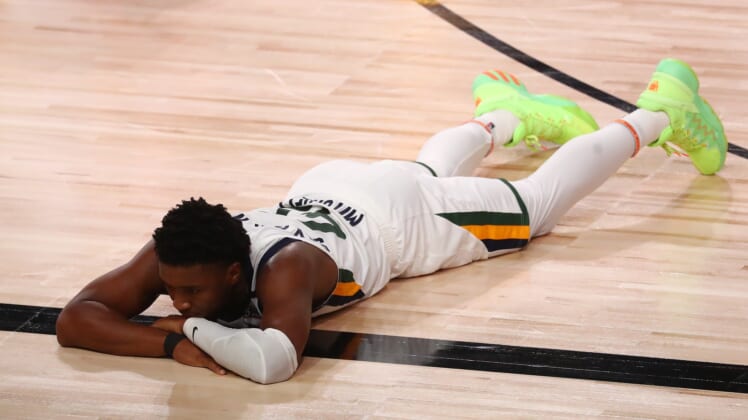 Sep 1, 2020; Lake Buena Vista, Florida, USA; Utah Jazz guard Donovan Mitchell (45) reacts on the floor after a loss to the Denver Nuggets in game seven of the first round of the 2020 NBA Playoffs at ESPN Wide World of Sports Complex. Mandatory Credit: Kim Klement-USA TODAY Sports

For the first time since March of 1985, the Utah Jazz will have a new majority owner. In news that has been expected for some time, Gail, owner and chair of the Larry H. Miller Group of Companies, has opted to sell the NBA franchise.

“Gail Miller, owner and chair of the Larry H. Miller Group of Companies (LHM Group), and the Miller family today announced they have entered into definitive agreements to sell a majority interest in the Utah Jazz and other sports and entertainment properties to technology entrepreneur Ryan Smith, co-founder of Utah-based Qualtrics,” the Jazz announced, via their official website. “Included in the pending transaction are the Utah Jazz, Vivint Arena, the National Basketball Association (NBA) G League Salt Lake City Stars, and management of the Triple-A baseball affiliate Salt Lake Bees.”

This qualifies as pretty big news around the NBA world heading into the offseason. The Jazz remain an up-and-coming organization and will be seen as title contenders moving forward. As for the new owner, he’s a legend within the Salt Lake community.

Utah Jazz news: Who is the new owner?

The entrepreneur is said to be worth $1.3 billion. He cashed in to the tune of $8 billion immediately ahead of Qualtrics’ scheduled IPO back in 2009, selling the company to the Germany-based software firm SAP.

“I dreamed of playing for the Jazz and that didn’t work out,” Smith said at the press conference announcing the sale.

The 42-year-old was previously named on Forbes’ “America’s Most Promising CEOs under 35.” He’s seen as a giant in the industry and had in the past attempted to buy the Jazz.

This is not a complete sell off. Smith bought a majority share in the organization. That’s important to note given the big news on Wednesday. However, there’s also a good chance that Smith will ultimately buy the remaining minority stake in the Jazz at some point.

This news won’t be finalized until the NBA Board of Governors approves the deal. That shouldn’t be too much of an issue given his reputation and ties with the community in Utah.