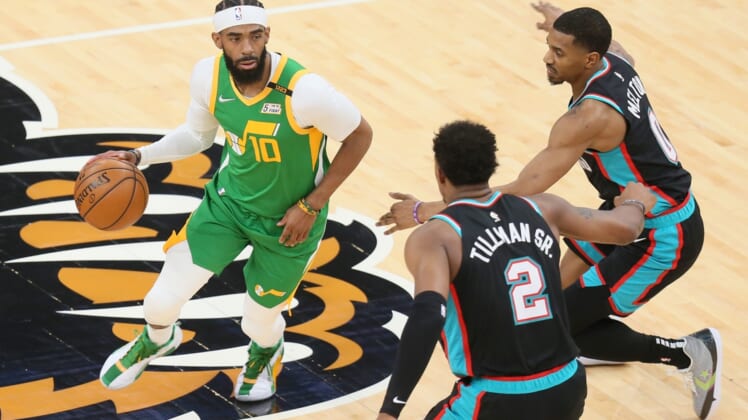 The Utah Jazz might not have ever looked forward to playing at home as much as they will Friday night when the Chicago Bulls visit Salt Lake City.

It’s not because the Jazz have won a franchise-record-tying 20 straight games at Vivint Center. Rather, it’s simply because the Jazz are back in Utah, safe and sound, after a harrowing experience en route to their previous game at Memphis.

The Jazz’s original charter flight flew into a flock of birds and was forced to make an emergency return and landing at Salt Lake International not long after taking off for Memphis. All-Star Donovan Mitchell, who was on the original flight, did not join the team on its second flight out of SLC and missed the game against the Grizzlies.

Mitchell tweeted support of his teammates during what turned out to be a 111-107 victory in Memphis. That was Utah’s third win over the Grizzlies in six days.

Snyder also lauded the Jazz for getting “a couple stops when we needed to” in the close call in Memphis.

Conley scored 13 of his team-high 26 points in the fourth quarter, while Jordan Clarkson (24 points) and Bojan Bogdanovic (23) each picked up their games to compensate for the lack of Mitchell.

Mitchell was the only one who remained back after the terrifying experience that still dominated the conversation after Wednesday’s win.

“The pilots were very calm when they got on the intercom, basically, telling us what happened, saying we lost an engine (and) we were going to be able to land somewhere,” Clarkson said. “But we were all looking out the window, like ‘Man, just land this. Just land anywhere. We don’t care. We’ll check everything else later once we get on the ground. Just please put this plane on the ground.'”

Despite the trauma, the Jazz left Memphis with a seven-game winning streak intact. Mitchell is expected to be available for Friday’s game against Chicago, which lost at home to Utah 120-95 on March 22.

The Bulls kept it close but were just defeated by the team trailing the Jazz in the Western Conference standings even though leading scorer Zach LaVine (right ankle sprain) didn’t play. Devin Booker scored 45 to lead the Phoenix Suns to a 121-116 home win on Wednesday.

“I thought Booker had a big night because he made all his midrange jumpers,” Bulls coach Billy Donovan said. “It wasn’t like he did it beyond the line, he did it from mid-range, so give him credit.”