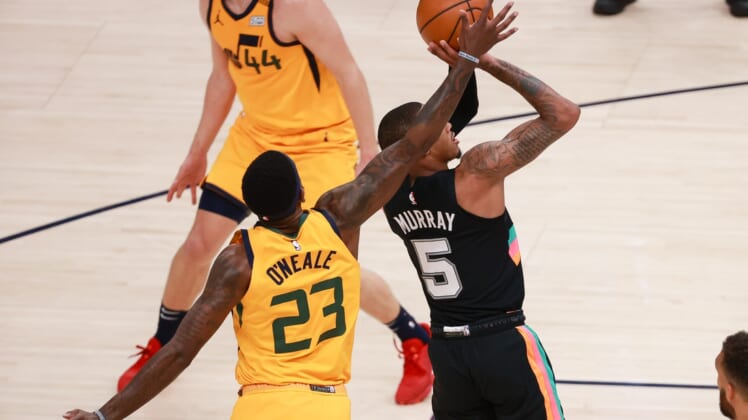 Utah (47-18) regained the No. 1 overall seed in the NBA, moving ahead of No. 2 Phoenix by a half-game with seven games remaining. The Suns had the night off.

DeMar DeRozan returned after taking a day off to rest to score 22 points for the Spurs (31-33), who lost in overtime to Philadelphia at home on Sunday night. The Spurs visit the Jazz again on Wednesday.

The Spurs have lost four in a row and remain in the 10th spot in the West, putting them in position to participate in the postseason play-in round.

Ingles hit a floating jumper 14 seconds into the contest and Royce O’Neale added a 3-pointer a moment later, and the Jazz led the rest of the way.

It was a rare blowout win at home for the Jazz of late. Though they have an NBA-best 28-4 mark at home, Utah has had a handful of tightly contested games and three surprising losses — one to Washington and two to Minnesota — on their home court.

The Jazz took a 10-point lead in the first quarter after a Bogdanovic driving layup. The Jazz stretched that advantage to 19 late in the second quarter before settling for a 60-43 lead at halftime.

Utah’s lead reached 25, but San Antonio chipped away but could only get within 11 thanks to 7-0 spurt in the final 1:32.