Utah Jazz blow out Lakers for split of two-game set 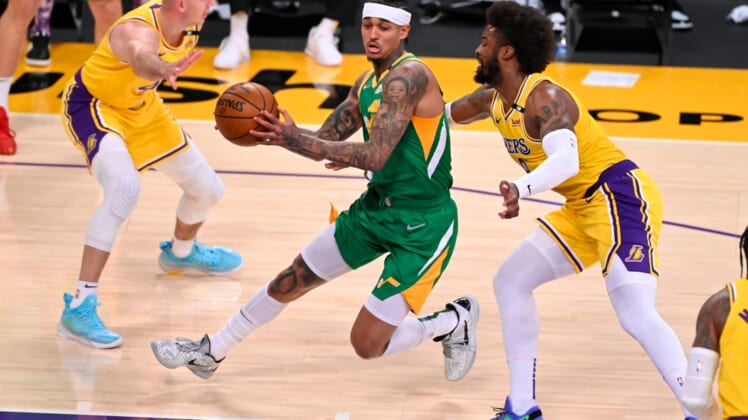 With frontline players Rudy Gobert, Derrick Favors and Mike Conley Jr. back in the lineup, the Utah Jazz made quick work of the host Los Angeles Lakers in the second straight matchup between the teams, prevailing 111-97 on Monday.

The Lakers won the opener of the two-game set 127-115 in overtime on Saturday. With the Jazz having earned a home win over the Indiana Pacers on Friday, Utah coach Quin Snyder chose to rest three of his regulars for the first matchup against the Lakers. High-scoring Jazz guard Donovan Mitchell missed both games, though.

The Jazz never trailed Monday, seizing control early and leading by as many as 25 points in the second half, showing why they are the leaders of the Western Conference.

With the return of Gobert, a two-time NBA Defensive Player of the Year, the Jazz controlled things inside, finishing with a 52-36 advantage on points in the paint and a 42-32 rebounding edge.

Jordan Clarkson led the Jazz with 22 points off the bench. Joe Ingles finished with 21 points. Bojan Bogdanovic totaled 19 points, and Gobert finished with 14 points and 10 rebounds.

Los Angeles did receive some good news on the injury front regarding sidelined stars LeBron James and Anthony Davis. Coach Frank Vogel said James has progressed to the point where he’s doing light work on the court after being out since March 20 with an sprain injury.

Vogel said Davis (calf) is getting closer to returning but needs to work on his conditioning. Davis has been cleared for full-contact practices and could return by the end of this month if things continue to go well during his ramp-up.

After the loss, Los Angeles heads out for a four-game road trip starting against the Dallas Mavericks on Thursday. The Jazz head to Houston to take on the Rockets on Wednesday.