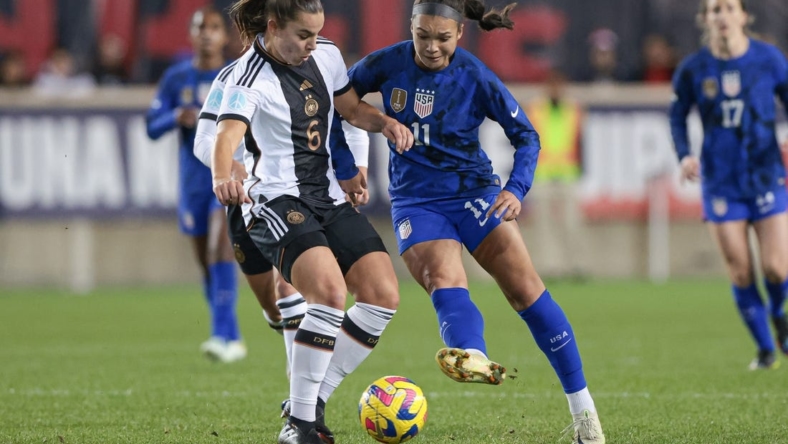 Second-half goals by Sophia Smith and Mallory Pugh powered the U.S. women’s national team to a 2-1 victory over Germany in a friendly at Harrison, N.J., on Sunday to end a three-game losing streak.

After Jule Brand gave Germany the lead in the 18th minute, Smith scored in the 54th and Pugh had the go-ahead score two minutes later in the final U.S. match of 2022.

The third-ranked Germans defeated the top-ranked Americans 2-1 in Fort Lauderdale, Fla., on Thursday to end their 71-match home unbeaten streak.

Germany went ahead 1-0 on Brand’s left-footed shot from the center of the box.

The U.S. allowed the first goal in four straight games after not doing so in any of their previous 21.

It took a while for the Americans to get untracked — they did not have a shot the first 35 minutes — but they regrouped after halftime.

First, it was Smith dribbling her way to the right side of the box and shooting while surrounded by four Germans to make it 1-1.

Pugh then took a long ball from Andi Sullivan and shirked a defender before scoring.

Alex Morgan became the 13th woman in USWNT history to play in 200 games. That it came on Nov. 13 was notable because the star forward, who wears No. 13, is in her 13th season.

She has 119 goals and 47 assists to rank fifth in goals and 11th in assists all-time in the program.

Morgan has played 142 friendlies, 24 World Cup or Olympic qualifiers, 18 Olympic and 16 World Cups, where she is a two-time champion.

Focus now turns to the 2023 Women’s World Cup co-hosted by Australia and New Zealand when the U.S. opens group play against Vietnam on July 22, 2023.