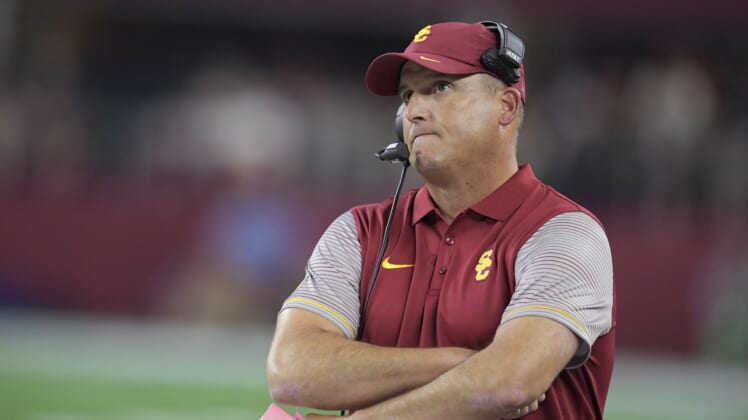 Several times over the past couple seasons it seemed that USC head football coach Clay Helton was one bad loss from being jettisoned from that role.

Now working under new leadership that includes athletic director Mike Bohn, it appears that Helton’s job could be safe.

“New USC AD Mike Bohn has been impressed with Clay Helton with the Trojans head coach in his time around him. And USC president Carol Folt, nearly as new on the job as Bohn, also is a believer in Helton, is very comfortable with him and likes the tone of his leadership,” Bruce Feldman of the Athletic reported Wednesday.

This would be a dramatic shift from Lynn Swann’s tenure as the Trojans’ athletic director. He never really went to bat for Mr. Helton.

Helton has USC at 8-4 on the season and ranked No. 25 in the most-recent AP poll. That comes after an ugly 3-3 start to the season. Most recently, the Trojans took down a then top-10 Utah team back on Sept. 20.

The embattled head coach has posted a 40-21 record in parts of six seasons as the Trojans’ head coach. That includes interim stints back in 2013 and 2015 before taking over on a full-time basis en route to leading USC to a Rose Bowl victory in 2016.