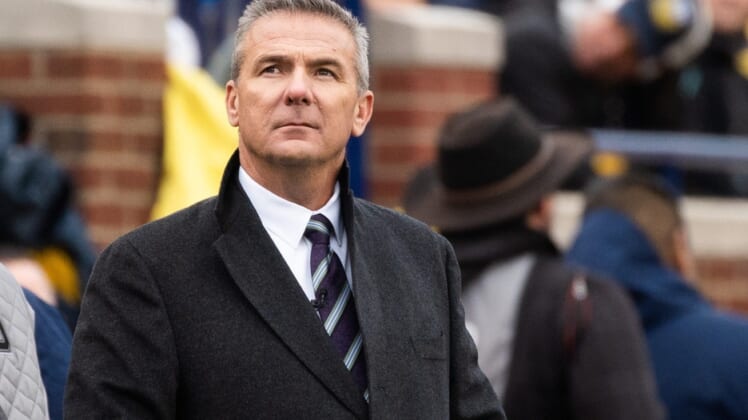 As the Jacksonville Jaguars continue to interview head coach candidates, the name of one Urban Meyer has popped up at a near never-ending loop following the firing of Doug Marrone.

A star head coach at Utah, Florida and Ohio State, Meyer is apparently the Jaguars’ top choice. This comes at a time of disfunction under the leadership of owner Shahid Khan. But it could end up being a coup for Jacksonville despite the fact that Meyer has no professional coaching experience. We also now have more information, and it’s rather interesting.

“It’s no secret that the Jaguars coaching job is Urban Meyer’s if he wants it,” Mike Florio of Pro Football Talk reported recently. “There’s a growing sense in league circles that he does.”

Florio goes on to note that there’s a growing sense around the NFL world that Meyer is in fact ready to take the Jaguars’ coach job.

A current analyst for Fox Sports, the 56-year-old Meyer last coached with Ohio State back in 2018. He resigned citing health issues that had been plaguing him for the majority of his head coach career. Obviously, Meyer does not think these issues will prevent him from the work that involves being a head coach in the NFL.

If the Jaguars were to hire Urban Meyer, they’d be bringing in a coach that had a wide array of success at three different stops in college. Meyer jumped on to the scene by leading Utah to an undefeated season and a Fiesta Bowl win over Pittsburgh in 2005.

He used that as a springboard to get the Florida Gators job the following season, ultimately posting a 65-15 record and winning a national title. After leaving The Swamp, Meyer landed with the Ohio State Buckeyes. Much like what we saw with Florida and Utah, the success did not stop. He posted a ridiculous 83-9 record with a national championship mixed in over seven seasons in Columbus.

What would an Urban Meyer hiring mean for Trevor Lawrence and the Jaguars?

The backdrop here is a Jaguars team that lost its final 15 games of the 2020 season. However horrible that performance might have been, it did net Jacksonville the No. 1 pick in the 2021 NFL Draft.

Despite his team’s loss in the CFB Playoff semifinals, Clemson quarterback Trevor Lawrence is considered the consensus top pick in the draft. It stands to reason that Meyer will pull the trigger and draft the talented quarterback.

With that said, Florio’s report noted that Meyer plans on retaining interim general manager Trent Baalke in the same role moving forward. It remains to be seen who will have player personnel control should this marriage come to fruition. Heck, Khan is said to have some say.

As for potential alternatives to Lawrence, the Jaguars will be linked to Justin Fields if they do indeed hire Urban Meyer. The Ohio State quarterback is coming off a season in which he led the Buckeyes to the national title game. Obviously, Meyer’s status as the former Buckeyes’ head coach could play a role here, too.

For now, we wait to see if this hiring becomes official. Until then, any speculation as it relates to the Jaguars’ offseason plans should be put on hold.