Since head coach Brian Kelly spurned Notre Dame for LSU after 12 seasons in South Bend, there have been several rumors hyping the next head coach of the Fighting Irish. Naturally, the list of candidates has even included Jacksonville Jaguars head coach Urban Meyer since the coach spent 1996-2000 at Notre Dame coaching their wide receivers.

While it may seem odd for an NFL coach to retreat back to college, it’s not unprecedented. Also, let’s not act like the 2-9 Jaguars are flourishing in Meyer’s first season. At the same time, Meyer has plenty of time to turn his new program around.

Meyer himself addressed the silly rumors of him departing from Jacksonville back to Notre Dame, saying “I’m not a candidate”.

What else is Meyer supposed to say? His denial isn’t very strong, but at the same time, Meyer shouldn’t have to spend five minutes convincing us of any of his future plans. He has several other more pressing priorities to focus on, like game planning for the Los Angeles Rams this Sunday. 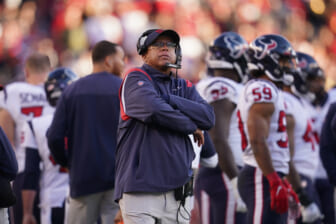 With that said, if Meyer does one day decide he’s more intrigued by getting back into college coaching, there would be no shortage of suitors for the three-time Division I FBS National Champion. But he may want to give the NFL a fair shot, since once he’s out, it’s going to be nearly impossible to get back in.

On the bright side, Meyer has one of the top quarterback prospects in football by his side with Trevor Lawrence and rookie QBs rarely have immediate success, especially when the Jaguars were always seen to be a project.

Nobody expected Meyer to go to Duval and turn a 1-15 team into a playoff contender in the matter of one year. We could be sitting here a year from today with Meyer’s Jags having a winning record and all these college head coaching rumors will disintegrate almost as quickly as they formed.