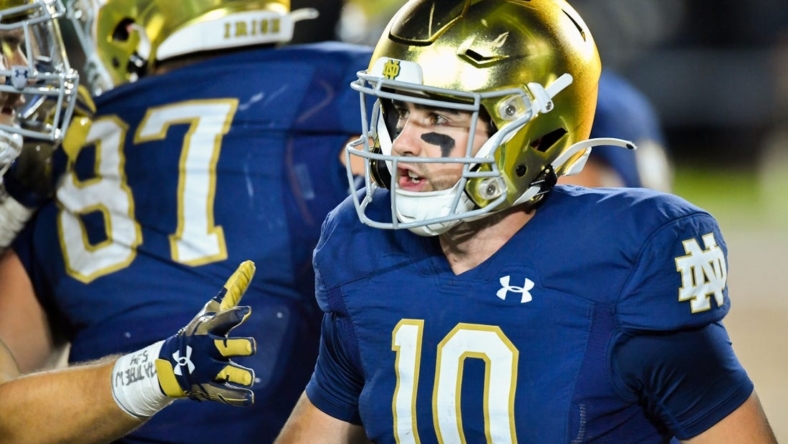 No. 18 Notre Dame will look to extend a four-game winning streak and continue its dominance in the annual Holy War rivalry game against Boston College on Saturday in South Bend, Ind.

The Fighting Irish (7-3) have rebounded well after an 0-2 start. Offensively, things have clicked with Notre Dame scoring at least 35 points in each contest of the streak, including a 35-32 win last weekend against Navy.

Boston College (3-7) has had a largely forgettable season but made a statement with a 21-20 upset win at then No. 16 NC State last Saturday.

To get another upset, the Eagles will have to reverse their difficult history against Notre Dame.

The Fighting Irish have won eight straight in the rivalry. In each of the past three meetings, they scored at least 40 points and each game was decided by at least two touchdowns. The last time Boston College beat Notre Dame came on Nov. 8, 2008, a 17-0 Eagles’ victory.

Notre Dame fended off an upset attempt last week against Navy. The Irish had a big lead at halftime and eased up, watching a blowout turn into a close game as the Midshipmen rallied and cut the score to a field goal with 1:21 remaining.

“One thing you know about Navy is they’ll never quit,” Irish coach Marcus Freeman said after the game. “We had to match their urgency throughout the entirety of the game. We did the first half. We did not have the urgency and the execution that we needed to finish the game the way we wanted to.”

Notre Dame quarterback Drew Pyne accounted for five total touchdowns against Navy and has been clicking lately. He has completed 63.1 percent of his passes for 1,547 yards, with 18 touchdowns and five interceptions.

Pyne has also been spreading the ball around effectively. Tight end Michael Mayer is his most frequent target with 54 receptions for 647 yards and seven TDs, but the Irish also have four other players with at least 16 receptions.

Morehead is a redshirt freshman who made just his second career start for Boston College in the win against the Wolfpack. He completed 29 of 48 passes for 330 yards and a trio of touchdowns.

Despite his inexperience, Boston College coach Jeff Hafley said he had full trust in Morehead, who guided a two-minute drill to perfection late in the upset.

“I didn’t want him to be tight and he wasn’t,” Hafley said after the game.

Boston College is locked into a losing season, but because there may not be enough bowl-eligible teams at 6-6, the Eagles still have an outside shot of winning out and reaching the postseason.