The NBA Playoff picture is starting to clear up to an extent as the season winds down. The Golden State Warriors and Cleveland Cavaliers have somewhat comfortable leads for the top seeds in their respective conferences.

Meanwhile, both the San Antonio Spurs and Toronto Raptors continue playing stellar basketball in hopes of catching the two defending conference champions for the No. 1 seed.

Here’s your updated NBA Playoff picture with less than a month remaining in the regular season. 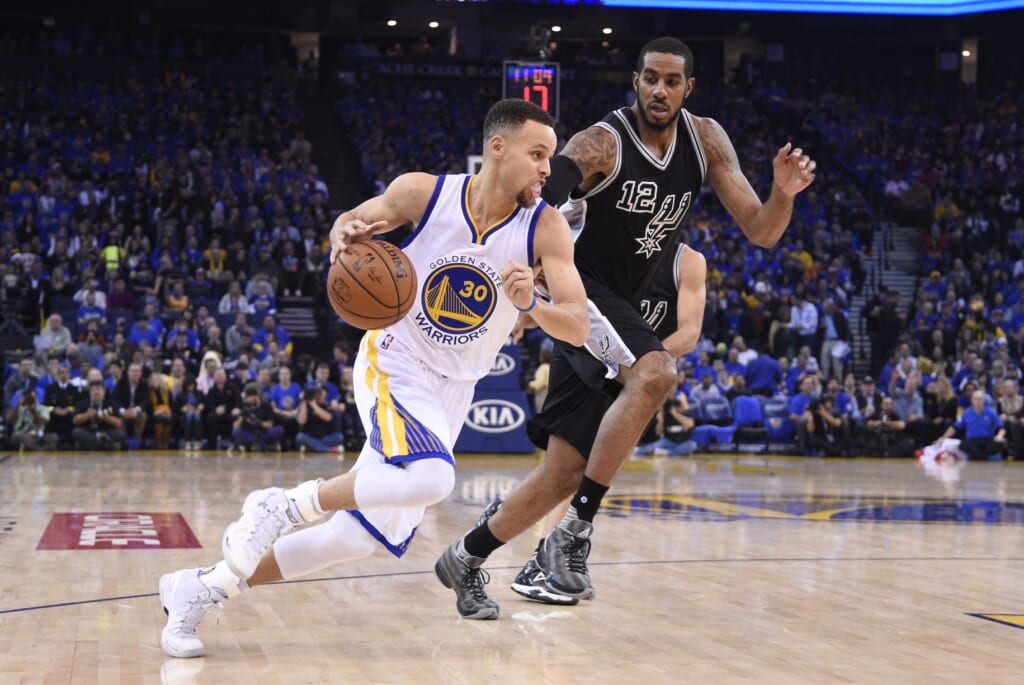 Golden State boasts a four-game lead over San Antonio for the top spot out west. With three games remaining against the Spurs, it’s not a foregone conclusion the defending champs have home-court advantage wrapped up.

But with six losses in 67 games, it’s hard to imagine them giving this lead up. Nine of the Warriors final 15 games are at home, where they have won 50 consecutive regular season games.

San Antonio is on the brink of wrapping up a top-two seed out west. It’s now all about catching the Warriors for the top spot. With 42 consecutive home wins, that’s going to be the biggest key here.

If San Antonio were to pass Golden State in the standings, it would then become favorites to earn the conference title. That’s a mighty tall task with 12 of their final 15 games coming against winning teams, including three against the Warriors.

This is where it gets interesting. With a 6-8 record since the All-Star break, Oklahoma City has allowed the Los Angeles Clippers to remain in contention for the third seed. It doesn’t take a genius to conclude that the Thunder want to avoid that fourth seed and a potential second-round series against the defending champs.

Now just 2.5 games ahead of the Clippers for the third seed, this is likely going to come down to the end. In the midst of a three-game road trip, nine of their final 14 games are away from Oklahoma City.

Not much has been decided here. We do know Los Angeles will not be the Pacific Division champions this year. We also know that it is playing mediocre basketball as of late, going 8-7 over the past 15 games.

Still in the hunt for a third seed out west, the Clippers are only a few games ahead of Memphis for the fourth seed. With three more games remaining on a difficult five-game road trip, the Clippers still have to travel to Memphis, New Orleans and Oakland before arriving home next Thursday.

Injuries and trades aside, the Grizzlies continue to be one of the most surprising teams in the NBA in the second half of the season. Despite a current three-game losing streak, including a 49-point loss to Houston on Monday, Memphis is just 4.5 games behind the Clippers for the fourth seed.

Based on its four-game lead over Portland for the fifth seed, it’s safe to conclude that the Clippers and Grizzlies are battling for home-court in what will likely be a first-round matchup between the two teams.

Following a near two-month stretch that saw Portland win 18 of 22 games, it has now lost five of seven. More so than pretty much eliminating any chance of earning a top-five seed out west, the Blazers now find themselves just a half game ahead of Houston and Dallas for the sixth spot.

Equally as important, they hold a 2.5 game cushion in the race for a playoff spot with 14 games remaining. Four of Portland’s next five games are on the road, including dates with the Spurs, Mavericks and Clippers.

Houston currently holds the tie-breaker against Dallas for the seventh seed out west. With Golden State and San Antonio holding the top two spots, the biggest key here for all of these bottom rung playoff contenders is actually catching Portland for the sixth seed. Well, that’s outside of actually earning a postseason spot itself.

With eight of their next nine against teams that are currently over .500, we will surely learn a lot about the Rockets before they embark on a relatively easy final week of the regular season.

Since boasting a 22-16 record on January 10th, the Mavericks have put up a 12-18 mark. This has them just 1.5 games ahead of the Utah Jazz for the final playoff spot out west.

With two games against Golden State and Portland in their next four outings, the Mavericks are hitting an extremely important part of the schedule. They also face Utah on the road in the second-to-last game of the season. Still within spitting distance of a top-six seed, there’s still a lot to be decided here.

Utah has followed up seven losses in eight games with a three-game winning streak. This has the team squarely in the hunt for one of the final two playoff spots out west.

Prepared to embark on a five-game road trip this upcoming weekend, the Jazz are probably heading into the most pivotal part of their schedule. Once they return home late this month, we should have a solid understanding of where the team stands. 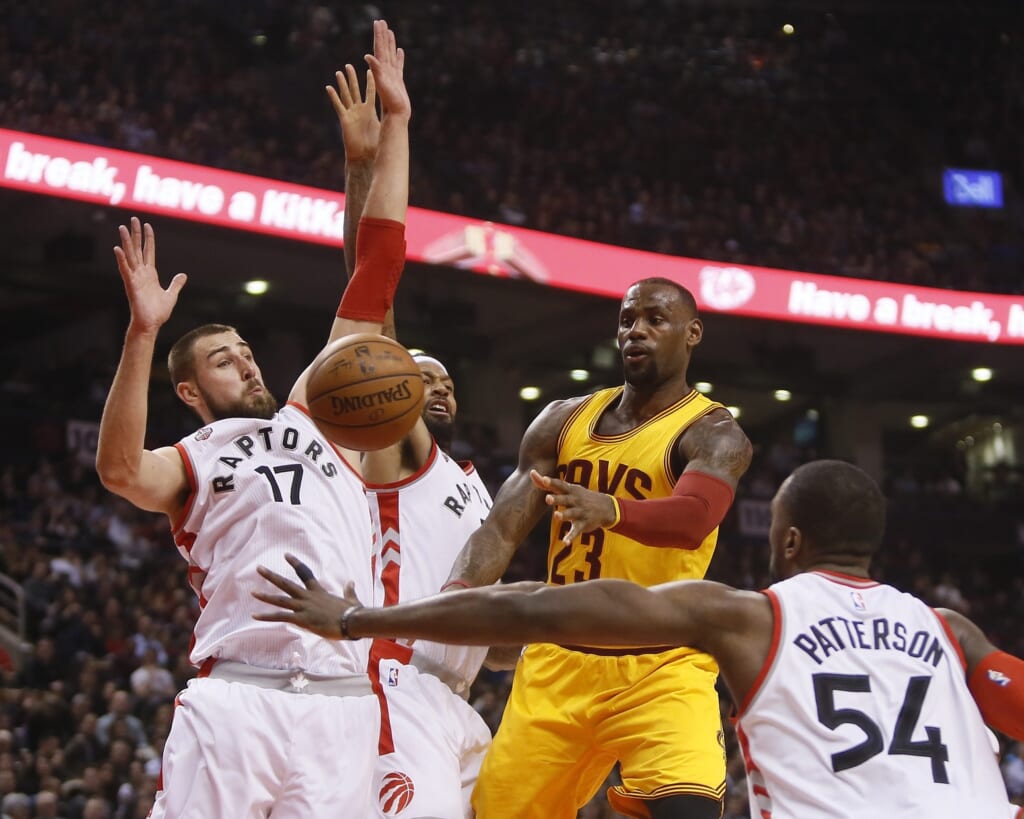 Despite all the drama unfolding in Cleveland, this team remains the clear-cut favorite to earn the top spot back east.

With a 2.5 game lead over Toronto for the No. 1 seed, the Cavaliers only face one team that’s over .500 in their next nine outings. This could give the team an opportunity lock up the top seed, something LeBron James and Co. will want to do early in order to get some rest before the playoffs.

Losses to Detroit, Houston and Chicago over the past two weeks really hurt Toronto’s chances of earning the top seed.

Now that nine of their final 16 games are on the road, six coming against teams that are .500 or better, the Raptors are going to have to put up an incredible stretch in order to catch Cleveland. The good news? Toronto is 6.5 games ahead of Miami for the second seed.

With 10 wins in their past 14 games, the Heat have over overtaken Boston for the third seed in the Eastern Conference. This could be important come playoff time, as it would allow the Heat to avoid Cleveland in the second round.

Miami does take on the aforementioned Cavaliers as well as the San Antonio Spurs over the next week. This will be an important stretch for the team to acquire an understanding of where it’s at. More than that, the Heat need to continue to perform at a high level to fend off both Boston and Atlanta for the third seed.

Eight of Atlanta’s final 14 games are at home with five of them coming against teams that are currently under .500. Considering how well the Hawks are playing (8-2 last 10 games), this bodes well for their ability to potentially earn a top-three seed back east.

Though, this team must take on both Cleveland and Toronto twice over the final two weeks of the regular season. Still not a lock to even earn a top-seven seed (2.5 games ahead of Indiana), those are going to be important games

For the first time in well over two months, Boston finds itself in the midst of a losing streak of more than two games. The unfortunate recent trend has to be the team’s inability to hold court at home.

After losing to a mediocre Houston team late last week, Boston dropped another home game on Wednesday, this time to the Thunder by 21 points. With eight of their final 14 games on the road, where the Celtics boast a losing record, this isn’t a good sign.

With wins in 16 of their past 20 games, the Hornets have pretty much guaranteed themselves a spot in the playoffs. They are now 4.5 games ahead of the Chicago Bulls for what would be the eighth seed. More importantly, Charlotte currently finds itself just one game out of a top-three seed in the Eastern Conference. That was unimaginable just two months ago.

Ten of Charlotte’s final 15 games come on the road. That’s a bit alarming considering this team is seven games under .500 away from home. The good news here is that Charlotte has an opportunity to strengthen its playoff positioning with six of its next eight games coming against losing teams.

It’s pretty amazing that Indiana still finds itself in prime position to earn a playoff spot after finding itself with a sub .500 record since early December.

Still 2.5 games ahead of Chicago for a playoff spot, Indiana has tough home dates against Toronto and Oklahoma City coming up this week. It then has eight consecutive dates against teams that aren’t currently over .500. Mediocrity meet mediocrity.

It’s not too often that a team in playoff positioning this late in the season loses by 43 points to a non-playoff team. That’s exactly what happened when Detroit lost to Washington 124-81 earlier this week. Detroit now finds itself in a practical tie with Chicago for the final playoff spot.

But with 10 of its final 14 games at home, this team has a relatively nice road ahead of itself. About to embark on a season-long eight-game home stand, the first four of which are against losing teams, now is the time for Detroit to make its play.

Man, this team is hard to read. Even with Derrick Rose seemingly fully healthy and Jimmy Butler returning from a knee injury, the Bulls simply can’t get out of their own way. The latest representation of this was a 21-point loss to Washington on Wednesday.

At nine games under .500 on the road, half of the Bulls remaining games come away from Chicago. That’s not a great indicator for success moving forward. Though, it is important to note that Chicago’s next six games are against opponents that are currently under .500.

As hard of a team as there is to read, Washington has followed up a five-game losing streak with two consecutive wins (both against playoff contenders) by a combined 64 points. Now that Bradley Beal has returned, that only adds to the Wizards’ hopes of earning a playoff spot.

Just 1.5 games out of the final playoff spot back east, Washington has a real chance to outlast Detroit for the eighth seed. And in reality, that’s something Cleveland wouldn’t want to see happen.