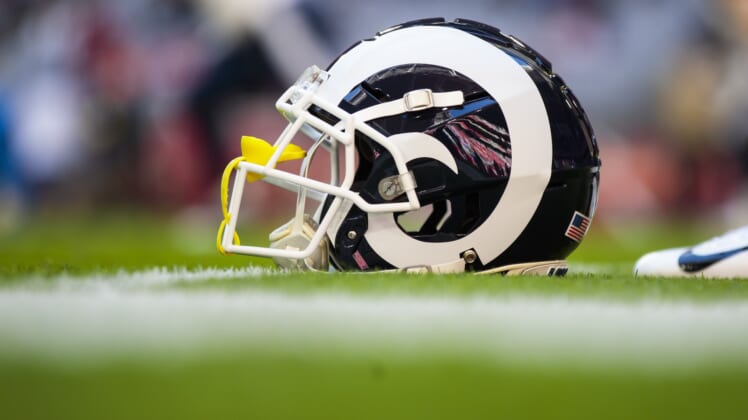 The Los Angeles Rams’ decision to trade an overpriced and underperforming Brandin Cooks to the Houston Texans on Thursday changes the dynamic of their draft.

Los Angeles has needs on both sides of the ball — needs it must fill to even have a remote chance of competing in the NFC West next season. That starts at running back, continues at wide receiver and comes to a culmination on the defensive side of the ball.

Here, we provide you with an updated full seven-round mock draft for the Rams about two weeks from the annual event taking place.

The release of Todd Gurley pretty much means that Los Angeles is going to go running back early in the 2020 NFL Draft. The team simply can’t rely on the combination of Malcolm Brown and Darrell Henderson to get it done behind Jared Goff in the backfield.

Enter into the equation a record-breaking performer in that of Jonathan Taylor. He seems to fit Sean McVay’s offense as a back who can block and catch passes out of the backfield. Taylor would be a near-perfect fit and a steal at this point in the draft.

Los Angeles uses the pick it acquired in the Brandin Cooks trade to add another receiver to the mix. It comes in the form of hometown boy Michael Pittman Jr. One of the most underrated receivers in a deep class, the 6-foot-4 Pittman has the size Los Angeles needs with the smallish Cooper Kupp and Robert Woods heading their receiver group right now.

Pittman could start immediately out of the slot, providing Goff with a big-body receiver who boasts a huge catch radius. The former Trojans star recorded 101 receptions for 1,275 yards and 11 touchdowns last season.

Los Angeles’ questionable decision not to re-sign slot corner Nickell Robey-Coleman forces the team to look at this position earlier than it would like. As of right now, David Long would likely get the call in the slot. That’s not great news. Enter into the equation a true slot corner in that of Darnay Holmes. The Rams go back to their Los Angeles roots and adds a potential starter who will pay off immediately as a return man.

With Dante Fowler Jr. and Clay Matthews no longer on the Rams, that’s almost 20 sacks missing from last season’s roster. The addition of former Chicago Bears first-round bust Leonard Floyd does nothing to change this dynamic. The good news for general manager Les Snead and Co. is that they are able to add a highly productive player in Greenard. The 6-foot-4, 262-pound edge rusher recorded 16 tackles for loss and 10 sacks last season.

Retaining longtime left tackle Andrew Whitworth was big for the Rams last month. He will continue to anchor a pretty solid offensive line. But this is a short-term fix. After all, Whitworth contemplated retirement before returning. In Charles, the Rams acquire a studly offensive lineman who could play guard out of the gate and transition over to tackle once Whitworth does call it a career.

Los Angeles has no real internal replacement for Pro Bowl linebacker Cory Littleton after he bolted for Las Vegas in free agency. While Lewis won’t get the call out of the gate, he could be a core special teams performer early with an outside shot at starting later in his career. The small-school product recorded 94 tackles, three interceptions and two forced fumbles last season.

The Rams will likely come out of this month’s NFL Draft adding two receivers to the mix. Once considered a mid-round pick, at worst, White makes sense for McVay and Co. The 6-foot-3 pass catcher hauled in 66 receptions for nearly 1,000 yards with the Spartans last season.