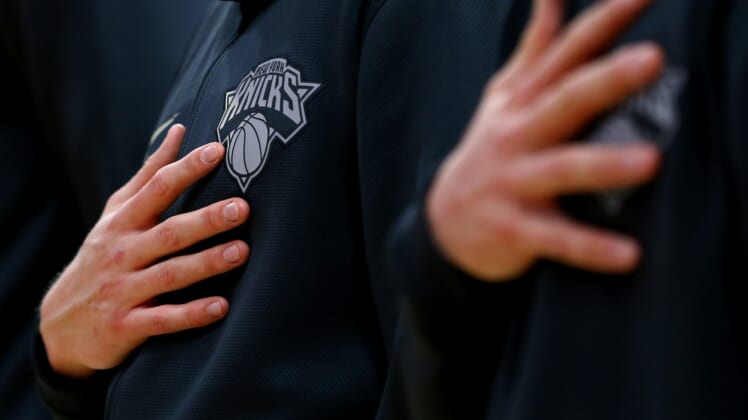 There’s no final determination regarding whether the 2019-20 NBA season will continue with it currently in suspension due to the COVID-19 pandemic.

What we do know is that the 2020 NBA Draft will take place in some form this summer. How it might look is anyone’s best guess.

Looking ahead, here’s an updated take at how the first round of the 2020 NBA Draft will play out. Multiple trades shake up the foundation of the top 10. The New York Knicks, long hard on luck, move up for their guy. Meanwhile, the Golden State Warriors add more assets to their injury-ravaged roster.

New York needs to find that star power it has been missing. The Big Apple calls for it. And it’s something that the previous brass failed to deliver. The Knicks take matters into their own hands here, moving up three spots for the top player in the draft class.

The 6-foot-5 Edwards averaged north of 19 points per game last season and has the confidence that would fit well in North America’s largest media market. Simply put, he has the “it” factor. It also doesn’t hurt that New York rids itself of Julius Randle’s bloated contract with Golden State using the Andre Iguodala trade exception to take on his salary.

Fresh off acquiring big man Clint Capela to help out super star guard Trae Young, Atlanta now needs to think about finding a wing to team up with Mr. Young.

Avdija has risen up the draft board big time in recent weeks due to his plus-level passing ability and improved shooting. He might not be this draft’s version of Luka Doncic, but the dude comes close. Playing against pro competition overseas will also help him transition to the NBA. It’s a perfect fit.

Prior to a rift with the NCAA, this 7-foot-1 big man was well on his way to being the consensus No. 1 overall pick. Wiseman has elite talent and could make and immediate impact as a 15-plus point-per-game scorer out of the gate.

It’s something the Hornets need given how their roster is constructed. The back-court combo of Terry Rozier and talented youngster Devonte’ Graham could move Michael Jordan’s franchise forward. But getting a big in Wiseman would set this team up for playoff contention.

One of the top players in college basketball last season, Toppin averaged 20.0 points and 7.5 rebounds on 63% shooting from the field. He’s quickly ascending the NBA Draft rankings with the annual event still scheduled to go on at some point in the near future.

For Golden State, this would be the best of both worlds. It adds valuable draft pick assets and find a big to potentially team up with the talented Eric Paschall. This would also enable the Dubs to potentially move on from the enigmatic Draymond Green sooner rather than later.

The back-court combination of Collin Sexton and Darius Garland has a chance to be absolutely elite for the rebuilding Cavaliers. They looked great with one another in limited action prior to the 2019-20 season being suspended.

With that said, Cleveland needs to find some bulk up front. This is where the 6-foot-9 Okongwu comes into play. The teenager might still be raw, but he did find a way to average 16.2 points and 8.6 rebounds on 62% shooting from the field for the Trojans last season.

It’s been known for some time now that the Suns have been looking to add a point guard of the future. Under this scenario, Phoenix gets one of the biggest names in the draft class to team up with All-Star Devin Booker. All it has to do is yield a former lottery pick in Mikal Bridges who seems redundant in the desert with Kelly Oubre doing his thing at small forward.

Ball already boasts plus-level court vision and passing ability. He’s the most talented of the three Ball brothers. That says something given how Lonzo has looked in New Orleans. This would be a match made in heaven for general manager James Jones and Co.

Heading into a complete rebuild at some point soon, Detroit will have to think long and hard about trading Blake Griffin. It will put the team in a position to go best-player available in the first round.

That’s where Hayes comes into play. Playing overseas due to his father’s career in Europe, Hayes already boasts pro-ready capabilities. That’s especially true when it comes to his ability to put the ball in the bucket. He would be the first of many pieces as Detroit starts anew with a rebuild.

Hampton likely would have been better served going one-and-done in college rather than playing professionally overseas. The current COVID-19 pandemic has disabled the ability of teams to get a first-hand look at the prospect. His injury in New Zealand last season also did not help.

With that said, Chicago is a perfect fit for the wing. Zach Lavine has played more at small forward recently. Last year’s lottery pick Coby White can play the more traditional point guard role if need be. Hampton just makes too much sense here.

There’s no reason to believe Washington has faith in injured point guard John Wall being part of its future. The team is now headed by Bradley Beal, who was having a heck of a 2019-20 campaign before the season was suspended.

Minnesota was able to add a young wing in Mikal Bridges by trading down a few spots in the top 10. It still finds a way to get a running partner for the recently acquired D’Angelo Russell in the backcourt moving forward.

Vassell should go much higher than this selection. It’s just the way the top-nine played out. The former Seminoles star averaged 12.7 points and 5.1 rebounds on a tremendous 49% shooting from the field last season. He’d pair up with Russell to form a great long-term tandem for the Wolves.

Yet another player who should be a top-10 pick, San Antonio sees Bey fall right on to its lap at 11. He’d be a perfect wing replacement for the soon-to-be departed DeMar DeRozan and could help the Spurs usher in a rebuild that’s so desperately needed right now.

Bey (6-foot-8), showed out big time in his sophomore season with Villanova. Here’s a dude who averaged 16.1 points on 48% shooting, including a 45% mark from distance in 2019-20. He’s pro ready and gives San Antonio a legit outside shooting threat.

Despite their struggles under Luke Walton this season, the Kings have a talented young core. Their backcourt of De’Aaron Fox and Buddy Hield is nothing to sneeze out. Injuries aside, Marvin Bagley III has a bright future.

It’s in this that we predict Vlade Divac and Co. go back to Duke with Carey. He can play alongside Bagley and was tremendous as a freshman for the Blue Devils. Here’s a dude who averaged 17.8 points and 8.8 rebounds on nearly 60% shooting as a teenager.

We still have no idea when Kyrie Irving will return from the shoulder injury that cost him most of his first season in Brooklyn. And at this point, the marriage itself might have already proven to be a failure. Meanwhile, Allen’s talents has not translated to Brooklyn’s brass being too fond of the talented big.

In short, Brooklyn adds one of the top point guards in the class in that of Haliburton while picking up fellow youngster Jaxon Hayes in a trade up seven spots. It won’t hurt the team’s ability to contend short term with Kevin Durant.

At this point, it has become clear that the star-studded backcourt combo of Damian Lillard and C.J. McCollum won’t be enough for Portland to contend out west. I fully expect the Blazers to attempt to move McCollum at some point here soon.

If so, they need a replacement. Maxey (6-foot-3) could be that guy. The shooting guard averaged 14 points on 43% shooting from the field as a freshman last season. He still must find a long-range game, but his overall ability would be a boon in the Pacific Northwest.