Up eight in first minute, No. 19 Illinois crushes Monmouth 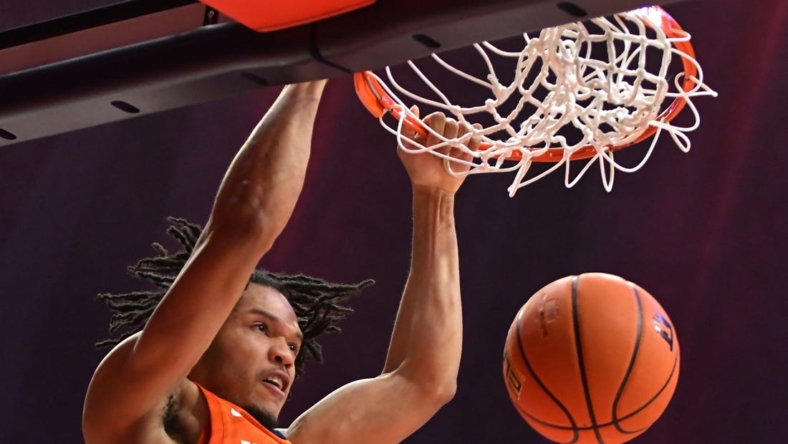 Terrence Shannon, Jr. scored a game-high 30 points Monday night and No. 19 Illinois roared out to a 30-point halftime lead in a 103-65 rout of Monmouth in Champaign, Ill.

Shannon, a Texas Tech transfer, rolled up 21 in the first half, when the Fighting Illini established a 63-33 lead by hitting 23 of 30 shots from the field. Illinois’ defense also created a whopping 17 first-half turnovers that were cashed in for 22 points.

Jayden Epps came off the bench to add 21 for Illinois (3-0), going 5 of 9 from the 3-point arc. Dain Dainja contributed 15 points in just 19 minutes, failing to record a double-double for the first time in three games.

The only suspense over the game’s last 30 minutes was whether the Illini could reach 100 points. They did so with 3:54 left when Dainja tallied on a putback as he was fouled.

Freshman Andrew Ball scored 13 points in a reserve role to lead the Hawks (0-3), who are playing their first season as a member of the Colonial Athletic Association. Another freshman, Jack Collins, added 12 points.

It wasn’t close to being enough as Monmouth took its third straight blowout loss. The Hawks weren’t strong with the ball, finishing with 24 turnovers that Illinois turned into 30 points. The Illini also owned a 35-21 rebounding advantage.

Illinois wasted little time administering the beatdown. The Illini scored eight points in the game’s first 44 seconds, forcing Monmouth coach King Rice to call a timeout before his team even scored. This was a night when Rice simply didn’t have enough timeouts to keep the Illini at bay.

Skyy Clark’s transition layup at the 12:48 mark of the half upped the margin to 20-9, and the gap stayed in double figures for the game’s remainder. It reached 20 for the first time when Shannon stroked a 3-pointer with 10:16 left before halftime.

Illinois’ advantage reached 33 on three different occasions late in the half.