As cases of COVID-19 surge across the globe, Canada is moving forward with new travel restrictions that will prevent unvaccinated NBA players from playing in Toronto beginning on Jan. 15.

Canada’s minister of public safety, Marco Mendicino, recently announced, the country would eliminate a national interest exemption that allowed unvaccinated NBA players to cross into the country to play against the Toronto Raptors.

The exemption is being eliminated due to the wide availability of vaccines, which players can receive in their home city or with the help of their respective teams. Now, per The Athletic’s Shams Charania, the NBA is confirming the new rule will impact the league beginning on Jan. 15.

Notably, per The Athletic, any player who doesn’t provide verified proof of their full vaccination status and is thus ineligible to play in Toronto, would face additional consequences. The athlete would receive reduced compensation or could be subject to either a fine or suspension.

The decision will also have an impact on the ongoing NHL season and will likely remain in place for the 2022 MLB season. Notably, the NBA’s vaccination rate is estimated to be above 93 percent.

Unvaccinated NBA players that will be impacted by new restrictions

Washington Wizards star Bradley Beal is among the most prominent unvaccinated NBA players. But the Wizards have already played two games in Toronto this season, meaning the only other time they would meet would be in an unlikely NBA playoffs matchup.

Brooklyn Nets point guard Kyrie Irving has spoken out about vaccine mandates and his status as an unvaccinated player has kept him out for the entire season due to New York City’s COVID-19 protocol guidelines for large indoor gatherings. 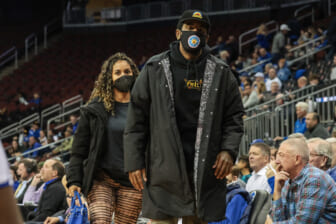 Also Read:
Kyrie Irving ‘not anywhere closer’ to getting vaccinated, will only play this season if traded

The Raptors’ first home game after the law goes into effect comes on Jan. 23 against the Portland Trail Blazers, followed by a Jan. 25 matchup vs. the Charlotte Hornets.

Orlando Magic forward Jonathan Isaac, who is still recovering from surgery, is among the most outspoken unvaccinated NBA players. But the Magic travel to Toronto on Dec. 20, their last game in Canada, and Isaac isn’t close to a return.

Importantly, Canada states that players must be fully vaccinated. So anyone who doesn’t receive the booster would also be ineligible to play in Toronto.