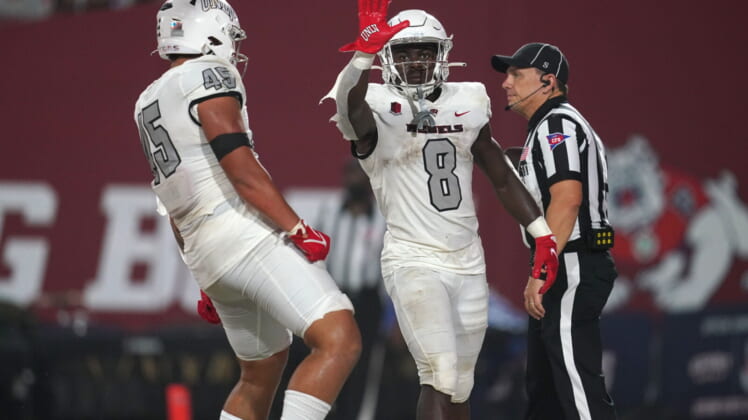 Coming off of a 27-13 victory against the University of Hawaii at home to claim the golden pineapple trophy, the UNLV Football Rebels will have a tough matchup against No. 19 San Diego State Friday night for Senior Day.

Head coach Marcus Arroyo said the program progressed to get the first two-game winning streak since Nov. 23 and 30, 2019 with a home win against San José State followed by a road overtime win at Nevada-Reno.

“Awesome opportunity this week to get back to work,” Arroyo told the media on Monday. “This weekend was a big step forward for us in regards to stacking a win and we saw a lot of things that we liked and encouraged by in regards to our mindset, identity and especially working through things that weren’t perfect.”

This week UNLV faces its fourth ranked team of the season in the Aztecs, who allow 17.1 points per game. That ranks inside the top 10 in the FBS.

Arroyo said the players has to be prepared this week in their final home of the season inside Allegiant Stadium.

“Now, we’ve got another big week versus a top-25 opponent, another one on a Friday night on a short week, so we got to roll,” Arroyo said.

With three previous games against ranked opposition, in addition to UTSA now being in the rankings, Arroyo said those games have prepared them not to make the mistakes that could impact the outcome Friday evening.

“Playing those teams early on, we knew the test in that as a program where we’re at is the toughness and resiliency you’ve got to have,” Arroyo said. “Obviously, that’s bit us in the butt a little bit with the depth and the injuries, but overall, I think when you go against those good teams, you see how fragile winning is and where the edge can be made.”

UNLV running game will be challenged against SDSU

Rebels senior running back Charles Williams, who will be one of 23 players playing their final home game tomorrow, recorded 38 carries on 266 yards and three touchdowns in the victory against the Rainbow Warriors last week.

Williams will have a tough task ahead of him against a stingy SDSU run defense that allows 83.1 yards per game, which ranks third in the country, only behind No. 1 Georgia and No. 15 Wisconsin.

Arroyo said the Aztecs’ defense is not their only specialty because of the little things they do.

“A really talented football team, but the talent itself isn’t just it,” Arroyo said. “They play hard. They play well. They execute. They don’t beat themselves. They tackle well. They’ve done a really nice job. They’re going to be really competitive and I think that’s great. I think it’s fantastic for us to get a group like that to come in here and see where we’re at, one that’s at the top of the conference and see what that looks like.”

Williams, who eclipsed the 4,000-career rushing yard plateau last week, is the reigning Mountain West Offensive Player of the Week and will look to finish off his home career inside Allegiant Stadium.

The 5-foot-9 rusher, who chose to stay another year, said the team already built the trust and camaraderie months prior to the beginning of the 2021 slate.

The Rebels and Aztecs face off tomorrow night at 8:30 p.m. on CBS Sports Network.