UNLV races past No. 21 Dayton in second half 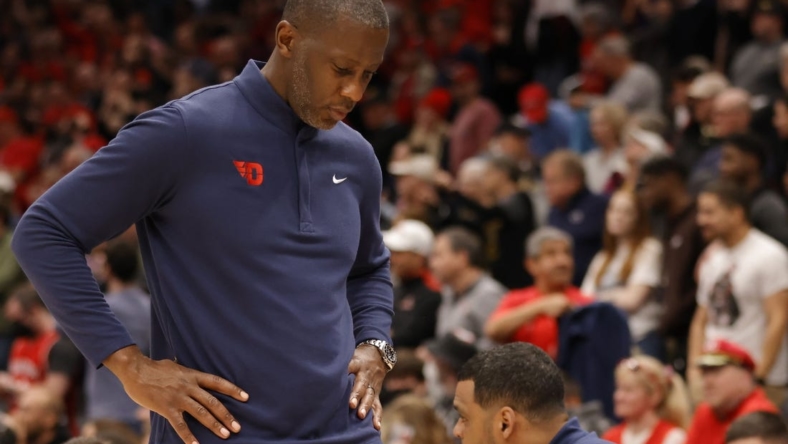 EJ Harkless scored a game-high 24 points and Keshon Gilbert added 16 as UNLV rallied from a 12-point deficit early in the second half to upset No. 21 Dayton 60-52 on Tuesday night in Las Vegas.

UNLV (3-0) has used defense as its calling card, forcing a total of 76 turnovers in its three victories.

Dayton was led by Kobe Elvis with 16 points and seven rebounds, while Mike Sharavjamts finished with 14 points.

UNLV raced out to an early 7-2 advantage before the Flyers went on an 18-4 run to take command of the game. Dayton used that spurt to race out to a 32-22 halftime lead.

The Flyers came out in the second half and appeared ready to assume full control, as Elvis connected on a 3-pointer just 2:36 into the half to put Dayton ahead 37-25. But UNLV scored the next 11 points, starting with a 3-pointer from EJ Harkless, to get back into the game.

Keshon Gilbert drained a trey with 10:53 left in regulation to give UNLV its first lead of the second half, 42-41.

Dayton responded as Sharavjamts drilled a 3-pointer from the baseline on the next possession for a 44-42 advantage. That would be the last lead of the night for the Flyers.

Harkless and Gilbert connected on back-to-back 3-pointers, taking advantage of the sloppy Flyers, who committed two of their 20 turnovers on consecutive possessions.

The Rebels, who closed the game on a 35-15 run, grabbed five offensive rebounds the final three minutes to keep the Flyers from having any chance at mounting a comeback.

Harkless and Gilbert both fouled out in the final minute but well after the game was in hand for the Rebels.