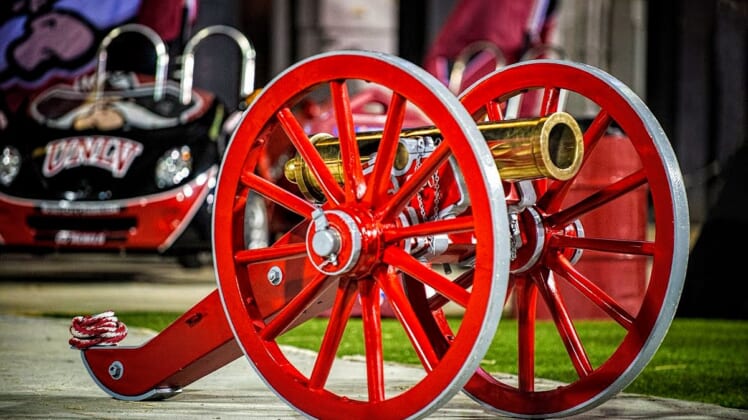 The most expensive rivals trophy in college sports – the Fremont Cannon – is on the line tonight in Reno as the Rebels try and end disastrous losing streak.

UNLV football continues the Mountain West Conference portion of its schedule on the road Friday night up the state in Reno when they face the Nevada-Reno Wolf Pack in the battle for the Fremont Cannon.

The Rebels were deep into San Jose State territory trailing by seven at the 11-yard line. It was third-and-2. Freshman quarterback Cameron Friel, who completed 20-of-28 passes for 240 yards and a touchdown, was sacked for eight yards. The seconds continued to tick down and before UNLV could get to the line of scrimmage, the clock showed triple zeros, ending the homecoming game in a 27-20 loss at Allegiant Stadium last Thursday night.

In addition, senior kicker Daniel Gutierrez’s streak of 16 consecutive made field goals came to end in the fourth quarter on a 40-yard attempt when the game was tied at 20 with 9:34 remaining.

The Wolf Pack are also coming off a tough loss on the road at Fresno State. Down 34-26 with two seconds left, junior quarterback Carson Strong completed a 12-yard touchdown pass to Cole Turner on third-and-10 to get back within two.

On the two-point conversion, Strong found senior wide receiver Romeo Doubs; however, Doubs’ could not get one foot in the end zone as he was pushed back beyond the end zone in a 34-32 loss.

The game between the Bulldogs and Wolfpack featured the conference’s top two quarterbacks.

Strong completed 49 of 61 passes for 476 yards and four touchdowns with an interception. On the opposite side, Bulldogs senior quarterback Jake Haener completed 26 passes on 38 attempts for 256 yards and two touchdowns.

Both Strong and Haener combine to hold the top two spots in several categories consisting of conference quarterbacks.

Not only will Strong be a player to watch for Nevada-Reno, but so will Doubs, who recorded 19 receptions for 203 yards and a touchdown against the Bulldogs last week. UNLV football will need to key in and contain the duo to have any shot at a victory.

Doubs ranks fourth in the conference in both receptions and yards with 55 catches for 590 yards this season. In addition, the 6-foot-2 receiver ranks third with 7.5 receptions per game and ranks second with 98.3 average yards per game.

As a whole, Nevada-Reno is the top-scoring team in the conference, averaging 35.7 points per game. The least points the Wolf Pack have scored in a game this season is 17, which came during a 38-17 loss on the road at then-No.25 Kansas State on Sept. 18.

Defensively, Nevada-Reno is a football team that gives up 25 points to its opponents this season.

That means scoring opportunities will be present and in order to contain the Wolf Pack offense, UNLV football has to keep Strong and the offense off the field.

As a result, the Rebels have to continue to give the ball to senior running back Charles Williams – who is one of two players tied for third in the MWC with seven rushing touchdowns – to extend plays and extend the clock.

The Rebels and Wolf Pack kick off Friday at 7 p.m. on CBS Sports Network.