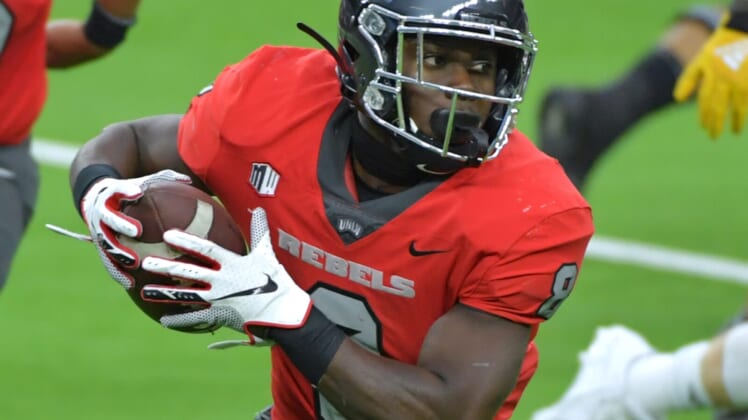 The UNLV Rebels football season gets underway at Allegiant Stadium in Las Vegas Thursday night as the Rebels host Eastern Washington to kick off the 2021 slate.

It is the first ever meeting between the two schools.

This season marks the second year UNLV football will play inside Allegiant Stadium, which is also home to the Las Vegas Raiders. UNLV played at the new stadium last season in front of limited fans but will be playing in front of an open crowd to kick off the season.

Eastern Washington, a member of the Big Sky conference, went 5-1 in conference play enroute to a second place finish a season ago.

Rebels head coach Marcus Arroyo, who begins his second season at the helm of UNLV football, is still looking for his first win in the Scarlet and Gray after going 0-6 in the COVID-shortened 2020 season.

One of UNLV football’s strengths in 2021 is returning eight of their 11 offensive starters from last season led by senior running back Charles Williams. Williams, who needs 60 rushing yards to become the fourth Rebel to accomplish 3,000 career rushing yards, is a player to watch. In addition, Williams is also 793 yards behind Tim Cornett, the program’s all-time rushing leader with 3,733 yards.

Defensively, the Rebels bring back 10 of its 11 starters from a year ago as cornerback Sir Oliver Everett was the only player who didn’t return. The full defensive line returns, led by senior defensive tackles Kolo Uasike and Eliel Ehimare.

As a whole, with 18 of its 22 starters back in 2021, it will help the team’s chemistry as a result of their experience playing together.

The biggest question remaining for the team is who will start at quarterback. With Max Gilliam graduating last year and Kenyon Oblad transferring during the offseason, the starting role is wide open.

The battle is currently between sophomore Doug Brumfield and junior Justin Rodgers.

Rodgers, who transferred to UNLV football from TCU prior to the 2020 season, played in two games last season against San Diego State and San Jose State and combined to complete 14 of his 22 passes for 161 yards and a touchdown for the Rebels.

Brumfield, who also saw time last year as a Rebel, played in two games against Wyoming and Hawaii and combined to complete nine of his 21 passes for 151 yards. He also rushed for a touchdown against the Cowboys.

The different arm looks, with Brumfield being lefthanded and Rodgers throwing from the right side, have perhaps been a reason why Arroyo hasn’t committed to just one QB.

Both are expected to play tomorrow against the Eagles.

The game kicks off at 7 p.m. at Allegiant Stadium. The game will be televised on Stadium.

After tomorrow’s game, the Rebels will play two Power 5 opponents beginning with Arizona State from the Pac 12 in Tempe, Ariz. on Sept. 11 and Iowa State from the Big 12 at home. Both of those games are expected to begin at 7:30 p.m.