UNLV football looking to get back on track against New Mexico 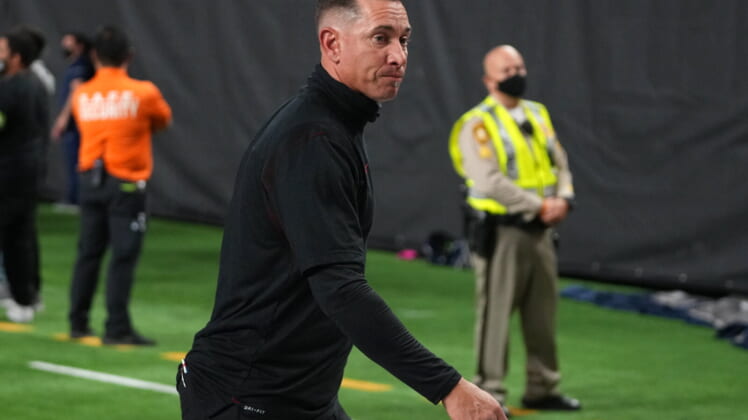 The UNLV football team is looking to turn the page after losing in embarrassing fashion to their in-state rival in an experienced Nevada-Reno squad last week. They head out to Dreamstyle Stadium in Albuquerque, N.M. to take on the University of New Mexico Lobos on Nov. 6 at 4 p.m.

Last Friday night, when UNLV faced the Nevada-Reno Wolf Pack, inexperience and emotions played a significant factor in a rivalry game where Nevada-Reno defeated the Rebels 51-20. The Scarlet and Gray did not score until the 3:15 mark in the third quarter.

In addition, the Wolf Pack did not punt once last Friday.

UNLV football head coach Marcus Arroyo said the entire team has to stay committed to achieving its goals on the football field and as a program.

“We remain, I remain, and our group remains positive, engaged, humbled and focused on the number one thing this week and that’s improvement,” Arroyo told the media on Tuesday. “That’s a huge piece in what we need to do. It’s another three or four days of development for a young group, especially when you’ve got guys filling in from all over the sidelines to get in there and get some run.”

Arroyo said Friel continues to go through growing pains in his first year as a collegiate play-caller.

“I didn’t flinch for a second in regard to keeping him in and getting through it. I made sure there was one that was a pickoff that was underthrown, a backfoot and not a good reset. The next throw was a pass and we made sure that we did that just because you need to throw them right back in the fire. That’s just part of this position.”

Now, UNLV football is looking to finish the season strong as they face three teams from the West Division of the Mountain West Conference Standings before playing the season’s final game at Air Force on Nov. 26.

Arroyo said the Rebels need to trust themselves to complete the season on a high note.

“We’re trying to make sure the thing is bringing it back to us,” Arroyo said. “I got to keep the focus on how we get better, what we need to do and, in those games, and in the season so far, we’ve really honed in and magnified that comment is where we played best.”

The final four games for UNLV football (0-8, 0-4 MWC) begin on Saturday against a Lobos team coming to a 14-3 win at 7,220 feet of elevation in Laramie, Wyo. against the Wyoming Cowboys two weeks ago.

All of the scoring took place in the game’s first 30 minutes as Lobos’ freshman running back Aaron Dumas, scored a 2-yard touchdown with 29 seconds remaining in the first half.

Not only was it a low-scoring affair, but it was also a low-yardage game at there was only a combined 255 yards of offense from both sides.

However, New Mexico (3-5, 1-3 MWC) has benefitted from redshirt freshman quarterback Isaiah Chavez, who completed 10-of-11 passes for 112 yards and a touchdown. Chavez also adds production with his feet, recording 16 carries for 49 yards.

The Lobos are led by head coach Danny Gonzalez and defensive coordinator Rocky Long, who are both New Mexico alum.

“They play hard. They’ll be well-coached,” Arroyo said. “Obviously, Coach Gonzalez and Coach Long have been around a long time. They do a really good job getting those guys going. They’ve been at that place before and they inherently know some of the things that go on culture-wise. It’ll be another dog fight for us.”

As much as UNLV football needs to get back on track, the key thing in this game is the turnover margin. Whoever gives up the least turnovers and scores the most points off takeaways will win.

New Mexico and UNLV kickoff tomorrow afternoon and will be televised on Stadium.