UNLV football set to take on No. 14 Iowa State 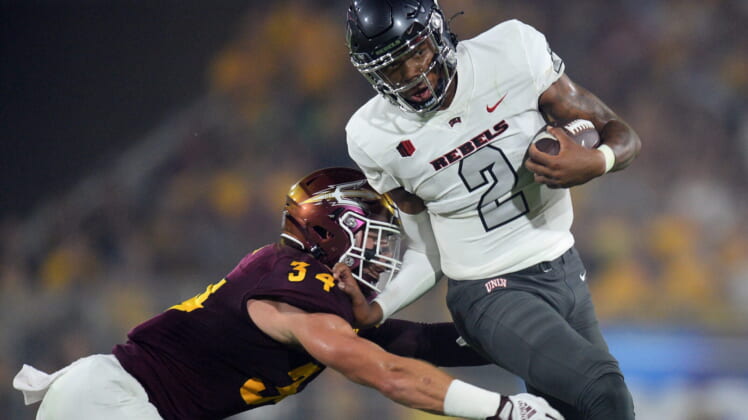 Through the first half of last Saturday’s game for UNLV football against then-No. 23 Arizona State, the Rebels (0-2) only trailed 14-10.

However, in the game’s final 30 minutes, the Rebels could not score while giving up 23 points, which led to a 37-10 loss.

UNLV football’s lone touchdown came in the second quarter when quarterback Doug Brumfield ran it in from four yards out with 8:46 remaining prior to halftime.

In all six possessions of the second half, the Rebels punted six times that included five three-and-outs.

UNLV football head coach Marcus Arroyo said the team wanted to open it up by increasing the tempo when they have the ball, especially in the first half, only trailing by four.

“We wanted to do something that we didn’t do in the first game,” Arroyo told the media on Monday. “That was to start faster and play a little better and believe there’s going to be an identity on our team that’s going to have to show up early on and play with a top-25 team.

“Now, we just need to put two halves together and make it work. There’s a lot of things in there that our guys understood, what we talk about and how we define exactly what’s going to give you a chance to win, regardless of who you’re playing or where you’re at.”

For a second consecutive week, the Rebels take on another AP Top 25 team in No. 14 Iowa State at Allegiant Stadium.

The Cyclones (1-1) opened the season in the AP rankings at No. 7 and hopes to represent the Big 12 in the College Football Playoff in a few months.

Iowa State won its opener against Northern Iowa, 16-10 and lost a tough game last week against then-No. 10 Iowa, 27-17 in the rivalry matchup.

Senior quarterback Brock Purdy leads the Cyclones, who completed 13-of-27 passes for 138 yards but gave up three interceptions and was sacked twice against the Hawkeyes.

Arroyo said he wants his players to continue to grow from last week.

“I want to see that we fix the mistakes we’ve endured in the first two weeks,” Arroyo said. “Our protection has to clean up, we’ve got to have situational football still continued to be played. We took care for the ball better in Week 2 than in Week 1. Red zone scoring has to continue to score, but we have to see if we can make it sevens.”

This past summer and into the first couple of games, the Rebels have switched offensive line coaches from Cameron Norcross to TJ Woods.

Woods took over the offensive line duties in June and spent the last couple of seasons at Utah State. As a whole, Woods has 17 years of coaching experience, which includes being in the Big Ten Conference at Wisconsin and in the Pac-12 at Oregon State before going to Western Kentucky in 2018.

He was the O-line coach at all three programs and during his time in the Badgers program, his position group helped block for Doak Walker Award winner Melvin Gordon, who is now in his seventh NFL season and second year with the Denver Broncos.

UNLV football sophomore center Leif Fautanu said the coaching adjustment period has benefitted not only himself but the entire offensive line.

“It’s a big improvement from last year to this year,” Fautanu said. “The transition between coaches, Norcross and Woods, is very smooth. Fundamentally, we’ve grown a lot more, only because of the technique that we use now and how we see things now, especially as a center. I see more of the field now, which is helping me grow.

“As a unit, I think we’re getting a lot better. We’re playing for each other.”

Like Arizona State, ISU was originally slated to visit Las Vegas last year, but due to the COVID-19 pandemic, the game was postponed. To replace last year’s game, the Rebels will travel to Ames, Iowa in 2030.