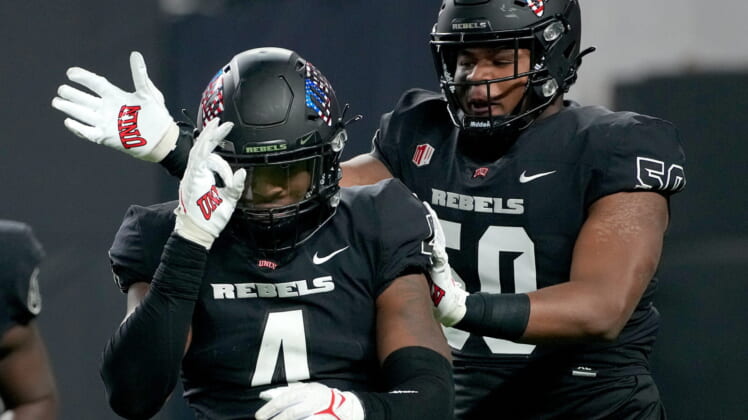 The UNLV Rebels Football team is looking to finish the season strong by winning three of its final four Mountain West Conference games.

UNLV head coach Marcus Arroyo said he saw a lot of silver linings despite the loss against SDSU as the Rebels look ahead to the Falcons.

Against the Aztecs last week, freshman quarterback Cameron Friel got injured early in the second quarter and had to exit the game. However, junior Justin Rogers filled in and was almost unstoppable. The 6-foot-4 Shreveport, La. native completed 15-of-21 passes for 305 yards and two touchdowns with an interception.

The key to Rogers finding success was looking for junior wide receiver Steve Jenkins, who recorded five catches for 176 yards, including an 80-yard play on third-and-2 from the UNLV 14-yard line.

That 80-yard play set up an 8-yard touchdown pass from Rogers to senior tight end Giovanni Fauolo Sr., which was the team’s first touchdown by a tight end this year.

“I thought we moved the at times pretty well,” Arroyo said. “WE won the explosive play battle. I thought we threw the ball effectively.”

Despite not being bowl eligible for the eighth consecutive year and not in contention for a Mountain West Conference championship, there are still other goals for the team to achieve in the season finale.

Arroyo said the team is trying to minimize the outside noise and focus on internal goals to accomplish.


This matchup will mark the second time travelling to Air Force in eight years and first since 2017 when the Falcons barely edged out the Rebels 34-30 in Colorado Springs, Colo.

One of the things to watch in the game are the running backs. Rebels senior Charles Williams, who is playing his final game in an UNLV uniform, and Falcons junior Brad Roberts will decide who will be the conference’s leading net rusher as Roberts is leading Williams 1,177 yards to 1,124 yards.

In addition, Williams leads the MWC with 13 rushing touchdowns while Roberts has 11.

Roberts leads a Falcons team, who ranks first in the conference and second in the country with an average time of possession of 36:18. Furthermore, Air Force is the No. 1 rushing team in the country, averaging 325.4 yards per game.

Air Force does it by running the ball every down as they lead the conference with a 76.3% completion rate on fourth downs.

Arroyo said facing a different style of running the football will test the Rebels to almost be perfect.

“They run option football, which is always a pain because you’ve got to be exactly right and exactly where you are,” Arroyo said. “They know exactly what they need to do.”

The Falcons and Rebels kick off Friday afternoon on CBS Sports Network.