In yet another dominant outing in the Tokyo Olympics, the United States men’s water polo team picked up their second blowout win cruising to a 20-3 win over South Africa.

The U.S. water polo teams are the only to each secure wins by at least 15 goals, with the U.S. women winning their opening game in competition 25-4 over Japan.

After finishing the first quarter leading 3-0, the U.S blew the game open outscoring South Africa 9-1 in the second quarter. Six of their 12 players scored a goal in the period including three goals from Ben Stevenson.

It has not been a good start for South Africa’s water polo teams, as their men opened the Olympics losing 21-2 to Italy. Meanwhile, their women have the worst loss of any team so far, losing their opening game 25-4 to Spain.

The U.S. women will be back in action tomorrow when they face Hungary, followed by the men going against Italy on Thursday. 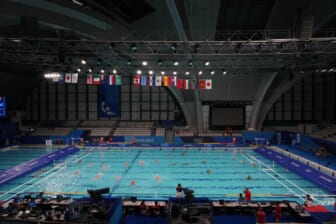