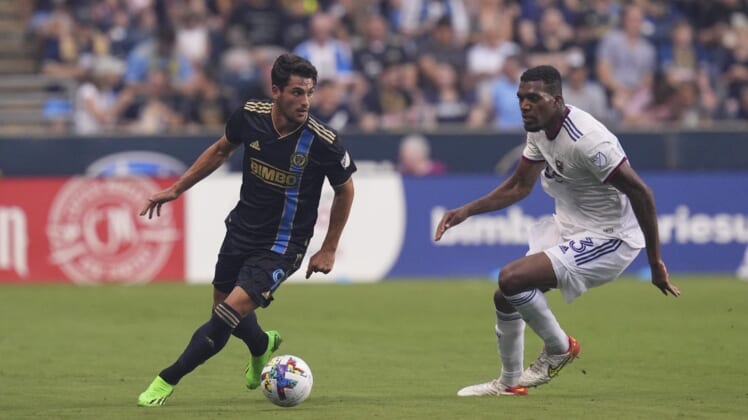 The goal output is a franchise record and ties for the second-most goals in MLS history. The Los Angeles Galaxy set the mark with an 8-1 win over the Dallas Burn on June 4, 1998.

Kai Wagner had three assists, Daniel Gazdag had two and Andre Blake made three saves for his eighth shutout of the season for the Union (8-2-9, 33 points). Philadelphia also matched the largest winning margin in MLS history, tying four other teams.

Philadelphia struck first in the ninth minute when Jose Martinez sent a long pass upfield to Bedoya, who sent a left-footed shot into the left corner of the goal.

The Union made it 2-0 off a corner kick taken by Wagner. Jack Elliott received the ball and sent it to Carranza, who delivered a bicycle kick to beat Romo in the 22nd minute.

Carranza scored again three minutes later after receiving a pass from Leon Flach. Romo was out of position and Carranza knocked it in with his right foot for his sixth goal of the season.

Wagner took a free kick and sent a pass to Bedoya, who snapped a header into the net to make it 4-0 in the 37th minute. The goal was Bedoya’s fifth of the campaign.

Philadelphia’s final first-half goal came in the second minute of stoppage time. Gazdag led the break and fed Uhre, who sent a right-footer past Romo.

Uhre scored his second goal of the match and fifth of the season in the 59th minute when he slammed a close-ranged right-footer between Romo’s legs.

Carranza first had a chance for the hat trick in the 70th minute when he took a penalty kick, but Romo made a leg save of his straight-ahead attempt.

Two minutes later, Carranza sent a left-footed shot into the left corner of the net for his third goal of the contest and seventh of the season.

Blake made strong saves on Taxi Fountas in the 49th and 55th minutes and Ola Kamara in the 50th.