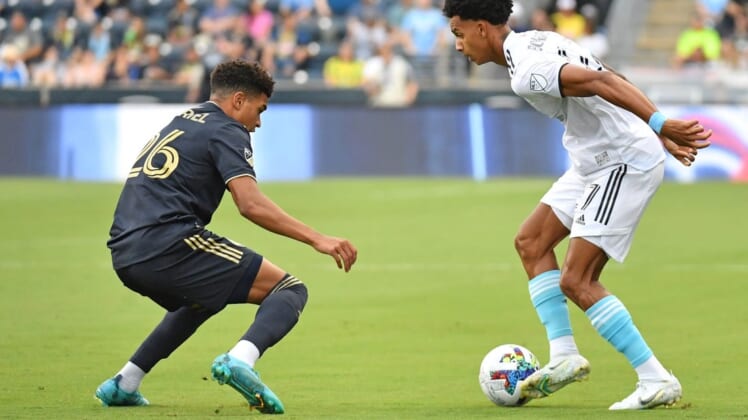 Daniel Gazdag and Mikael Uhre each scored one goal and the host Philadelphia Union rallied for a 2-1 victory over the New England Revolution on Saturday.

The Union (10-2-9, 39 points) extended their unbeaten streak to four games while extending their winning streak to three. They also improved to 6-0-5 at home.

Gustavo Bou scored the lone goal for the Revolution (6-7-7, 25 points), who dropped their second in a row.

In the eighth minute, Philadelphia’s Stuart Findlay fired a shot from the top of the box which was deflected out of bounds following a diving effort from Revolution goalkeeper Djordje Petrovic.

All-Star Carles Gil fired a shot high and wide to the right in the 10th minute.

Gil continued to control the midfield over the next 10 minutes, but the Revolution were caught offsides on several occasions as they attacked the net.

Philadelphia’s Jakob Glesnes took a shot from 35 yards out in the 22nd minute and Petrovic was forced to make a difficult save on the low lining drive.

Then in the 29th minute, New England’s Dylan Borrero ripped a shot from outside the box off the crossbar.

The Revolution controlled the ball in the scoreless first half with 61 percent of the possession.

In the opening 10 minutes of the second half, both teams tightened defensively with limited scoring chances.

Philadelphia earned a corner in the 56th minute, and after the initial cross was cleared, Jack McGlynn took a strong shot from outside the box. Petrovic was in position, however, to knock the ball out.

The Revolution went ahead 1-0 in the 61st minute when Bou received a crisp pass from Brandon Bye in the box and connected. It was the seventh goal of the season and the third in two games for Bou.

The Union equalized in the 75th minute when Kai Wagner hit a corner kick and Uhre headed the ball into the net. Wagner was credited with his 10th assist this season.

Henry Kessler was then whistled for a penalty against Gazdag, and Gazdag went on to score on the penalty kick in the 79th minute for a 2-1 advantage.