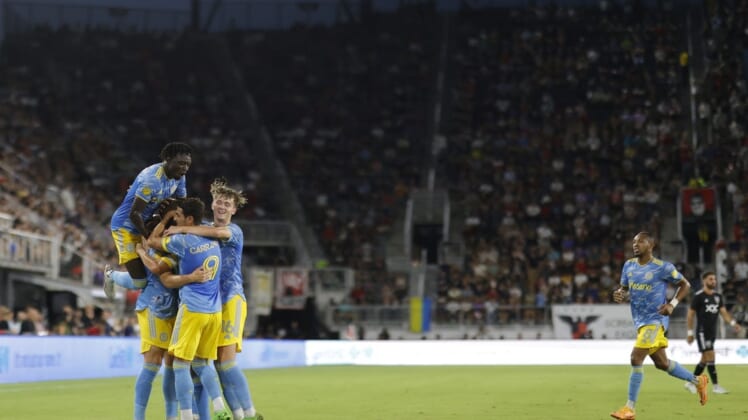 Julian Carranza scored a second-half hat trick as the visiting Philadelphia Union blew out D.C. United for the second time this season, winning 6-0 on Saturday night in Washington.

Carranza, who assisted on the game’s first goal, posted goals in the 47th, 70th and 74th minutes. Those tallies pushed the Union’s lead to 5-0 after it held a 2-0 halftime edge.

Mikkel Uhre and Daniel Gazdag scored in the first half for Philadelphia (14-4-9, 51 points), which holds the best record in the Eastern Conference. Cory Burke wrapped up the scoring in the 79th minute to complete a stretch when the Union scored three times in less than 10 minutes.

D.C. United (6-16-4, 22 points) is in last place in the Eastern Conference. The team hasn’t scored a goal in any of its five games this month.

Carranza, a 22-year-old forward from Argentina, also had a hat trick the first time the teams met this season. He now has 12 goals this season.

Gazdag assisted on Carranza’s first goal. Carranza’s other two goals were unassisted. His second goal of the night came on a right-footed shot from the right side of the box and the next goal resulted from a left-footed delivery from near the center of the box. He subbed out of the game in the 85th minute.

Gazdag’s goal came in extra time in the first half on a penalty kick.

The scoring began in the 37th minute when Uhre converted off Carranza’s crossing pass for his ninth goal of the season. Uhre controlled the ball in the box while fending off defensive pressure.

The Union reached the six-goal mark for the third time this season, beginning with a 7-0 drubbing of D.C. United on July 8 at home.

Union goalkeeper Andre Blake was credited with two saves for his 11th shutout of the season.

Jack McGlynn also had an assist.