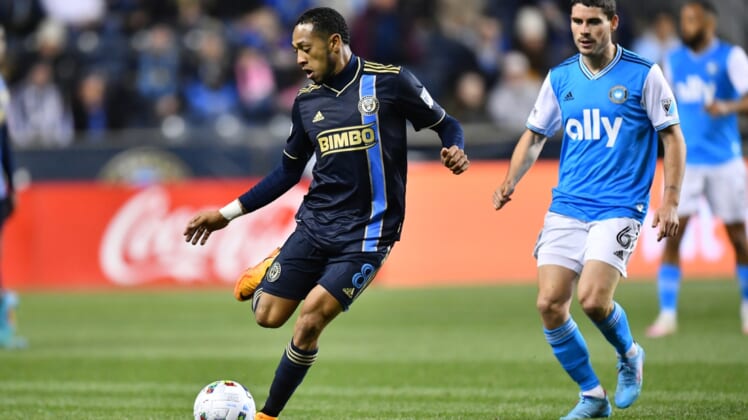 Julian Carranza and Daniel Gazdag each scored to lift the host Philadelphia Union past Charlotte FC 2-0 Saturday in Chester, Pa.

Goalkeeper Andre Blake earned his third straight shutout for the Union (4-0-1, 13 points), who extended their unbeaten streak to five in a row to open the regular season.

Captain Alejandro Bedoya was a surprising scratch after experiencing soreness during his training.

In the fourth minute, Kai Wagner sent a long ball to Sergio Santos, who then crossed to Carranza in the middle for a tap in and a 1-0 lead.

Charlotte FC struggled to generate much offensive pressure and didn’t register their first corner kick until the 22nd minute.

In the 35th minute, Wagner nearly scored but shot the ball just wide of the far corner of the net.

Goalkeeper Kristijan Kahlina kept Charlotte FC close with one save and several other strong plays in the box.

The Union came out aggressive in the second half and quickly went ahead 2-0 when Gazdag connected with his fourth goal of the season in the 46th minute. Gazdag ripped a shot from the top of the box which eluded Kahlina.

Charlotte FC soon began to attack a bit better, and Joseph Mora fired a shot slightly over the net in the 57th minute.

In the 67th minute, Charlotte FC was awarded a free kick just outside the right of the box. The free kick didn’t result in a shot on goal and was cleared.

Gazdag almost recorded his second goal of the game when his header in the box landed just wide of the net in the 74th minute.

Charlotte FC didn’t pose a serious threat the rest of the way, which included two minutes of stoppage time.