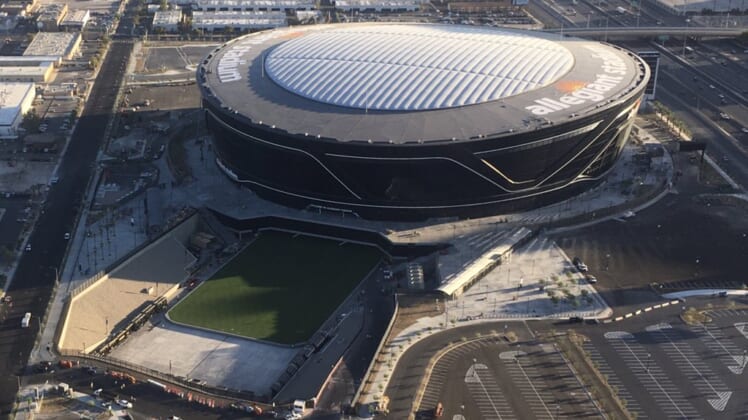 A global pandemic, state, national and state quarantine, and an economic collapse in Nevada isn’t a challenge the new Las Vegas Raiders could have planned for but how will it impact their first season in their new home?

The Las Vegas Raiders, over the course of their 60-year history (as the Oakland, Los Angeles, then Oakland again and now Las Vegas), have encountered challenge after challenge with some that seem almost insurmountable.

The latest challenge for the Las Vegas Raiders is one they could have never planned for nor could they have ever imagined: one of the greatest times in the franchise’s storied history would turn into a nightmare scenario.

As the NFL and the NFL Players Association meetings in New York continue this week, an agreement on how and when players will return to the field remains unfinished. Both sides are talking about all sorts of scenarios that focus on revving up the sport for the 2020 season but also work to protect players and staff once the big NFL machine gets moving again.

And although the NFL has been publicly all-steam ahead when it comes to the 2020 season, speaking with numerous league and team insiders, the mood is much more subdued with an overwhelming sense of concern. That concern isn’t so much for personal safety or concerns about the virus per se, but more about perhaps losing the 2020 season or at least a season of near-normalcy.

For the Las Vegas Raiders, it’s a special sort of kick in the nether-regions.

After a five-year journey of relocation from the Bay Area to Las Vegas, the team’s time had finally come to shine. A brand new training facility and headquarters were completed in June, and the $1.9 billion Allegiant Stadium will be done in just over two weeks but increasingly it appears most fans – and team employees – won’t even be able to enjoy or be a part of opening those two facilities.

In the past week, Nevada governor Steve Sisolak has rolled back the opening of the state which is an ominous sign if you’re a Raiders fan or season ticket holder in Las Vegas.

The City of Philadelphia has said Philadelphia Eagles games will not allow fans at games this season, based on local jurisdiction rules and regulations. Baltimore’s plan for a 15-20% capacity limit seems a bit overly-optimistic.

The league says it will leave it up to local teams and governments to determine the right approach to attendance. While that seems to be a bit of a cop-out, it makes sense even though an argument could be made the league should move to protect fans and players and be definitive like the NBA or Major League Baseball.

Still, for the Raiders, the pandemic and its ripple effects on the sports industry are especially hard to face. For the Raiders, who have scored massive corporate sponsors, and exciting new revenue streams and sold out their stadium and personal seat licenses, it completely throws a wet blanket on their big unveil.

“It’s the worst timing in sports history for all three teams,” an NFL league source told me by phone this week. “The Rams and Chargers are going to suffer too, but I agree the Raiders situation is worse due to the history there. You finally get your own market and stadium and then the most disruptive societal event in our history completely overshadows all that hard work.”

Team insiders have told me the mood is subdued. Very few employees can enjoy the new environment and culture planned for the Henderson facility. While they worry about everyone’s safety amid the COVID-19 pandemic, they’re also concerned the organization is missing a chance to get the big start they had planned to.

While the big founding partners (Allegiant Airlines, Ford, Coca-Cola, et al) are not a concern, as they signed on for 10-or-15 years, other sponsors – especially those in the service industry in Las Vegas – are. If the shutdown persists, and the convention and tourism industry are slow to recover, that concerns insiders.

You can never plan for something like we’ve been through worldwide over the past four months. The Raiders are still in a better position than they were 12 months ago and the future is bright – once we can get back to normal.

The community in Las Vegas may very well not be able to see their new team in public in 2020, but the buzz has continued to build. The Raiders recent television deals, coupled with the proliferation of team merchandise at local retail outlets, means Las Vegans are seeing a lot of the Raiders around town. The bad news: people aren’t getting out much.

Talking to two separate NFL team officials, they both believe fans in the stands the first year in Las Vegas is a long shot at best.

“Look, I’m still hoping we have a season at all,” an insider with an NFC team told me. “If you think there’s going to be fans in the stands, I think you’re living in a dream. We all want fans there for revenue and for home field advantage, but if it’s the difference between playing and not playing, let’s ask people to stay home so we can get at it.”

To his credit, Mark Davis, owner of the Raiders, has taken an “all or nothing” approach to fans at Raiders games in Las Vegas this year. When the NFL decided to tarp off the first 6-8 rows in all stadiums as a way to help protect players from the virus, Davis was the lone dissenting vote saying it wouldn’t be fair to fans.

“I can’t imagine telling one fan they cannot attend the opening game of our inaugural season in Las Vegas at the most magnificent stadium that they helped to build, let alone tell 3,500 fans that their seats are gone for the entire season,” Davis told Vinny Bonsignore of the Las Vegas Review-Journal after the owners call and vote. “Those seats in the front rows are some of our most ardent fans, including members of the famed Black Hole. You think I want to sell advertising on their seats?”

There’s no doubting Raider Nation is excited and wants to see their beloved Raiders play in Allegiant Stadium this season. And, although I have been an optimist about the return of the NFL over the past four months, increasingly people I trust tell me pro football may return but fans most likely won’t.

That’s a serious gut-punch to the Raiders, their new home of Las Vegas, and the fans.