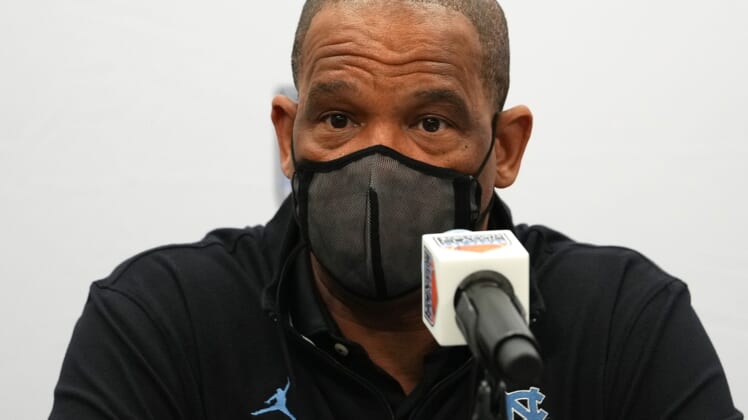 “We’ve used this time to really continue to hone in on the foundation pieces on both ends of the floor that we’ve been trying to stress this entire season,” North Carolina coach Hubert Davis said.

Originally scheduled for Jan. 1, the game was moved back one day to meet COVID protocol involving the Boston College team.

North Carolina (9-3, 1-0 ACC) most recently played on Dec. 21, defeating Appalachian State, 70-50. A scheduled home date with Virginia Tech for Wednesday night was postponed because of Virginia Tech being in COVID protocol.

Following a break for Christmas, the Tar Heels have been practicing since Dec. 26.

“We got right back into it,” Davis said.

On the day of the scheduled Virginia Tech game, the Tar Heels held an intrasquad scrimmage. Davis said he wanted the team to be back into some sort of game-like mode.

“I felt like we benefited from that,” he said. “It gave us more time to emphasize what we wanted to do at the defensive end.”

Davis said protecting the lane has been a priority, adding, “I’m excited to see what it looks like when we play an opponent.”

Boston College has stressed defense, allowing 61.6 points per game, which ranks third in the ACC.

“For us, our margin isn’t huge,” Boston College coach Earl Grant said. “We don’t have a large margin for error.”

Boston College (6-5, 1-0) played three December games, last taking the court on Dec. 13, a 61-57 loss to Albany that was the Eagles’ first setback in seven home games this season.

“It’s a humbling game,” Grant said. “We’re still trying to figure it out and we have a long way to go.”

Before the layoff, Grant said the grind of the schedule meant that some players needed a bit of a break. Certainly, he wasn’t expecting a gap of nearly three weeks between outings.

The Tar Heels had won 12 consecutive meetings with Boston College until the Eagles scored a 71-70 victory in the Dean Dome on Feb. 1, 2020. The teams didn’t meet last season.