Unbeaten Virginia steps up in class to face No. 21 North Carolina Tar Heels 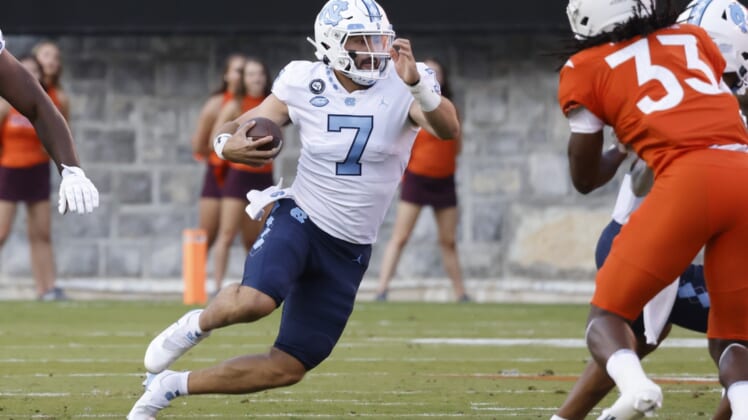 Virginia looks for its first road win against a Top 25 opponent since 2011 when it visits No. 21 North Carolina for an Atlantic Coast Conference game Saturday night in Chapel Hill, N.C.

Lately Virginia has also dominated the series against UNC, billed as the “South’s Oldest Rivalry.” This is their 126th meeting dating back to 1892, with the Cavaliers sweeping the last four contests.

“It’s not even on my mind,” UVA coach Bronco Mendenhall said when asked about his recent success against the Heels. “Looking back doesn’t help anyone. We’re focusing only on today and today’s preparation and then we’ll do the same tomorrow, and we’ll do the same until we show up to play.”

The Tar Heels began the season ranked No. 10 before losing their ACC opener at Virginia Tech.

Fueled by Sam Howell, North Carolina did just that with a 59-17 home thumping of Georgia State last Saturday night.

Howell passed for 352 yards and three touchdowns and rushed for 104 yards and two more scores, including a career-long 62-yard scamper. The only other Tar Heels quarterback with 300 passing yards and 100 rushing yards in a game was Marquise Williams against Notre Dame in 2014.

In two meetings with the Cavaliers, Howell is 38-of-57 passing for 796 yards, eight touchdowns and no interceptions.

Brown announced that cornerback Ladaeson DeAndre Hollins is out for the season with a lower-body injury suffered against Georgia State. Guard Joshua Ezeudu and running backs British Brooks and D.J. Jones will be evaluated during the week before their status for Saturday is determined. Safety Ja’Qurious Conley left Saturday’s game with an injury to his left hand and re-entered the game wearing a cast.

As for Virginia, Armstrong was treated in the medical tent during the Illinois game for an apparent leg/knee injury before returning to the field.

“Anytime your quarterback has anything, I’m concerned,” Mendenhall said. “I haven’t heard, which is always good news, otherwise I would have got texts and emails and alerts and reminders. I haven’t had any of that.”

Defensive end Adeeb Atariwa was in street clothes for the Illini game but Mendenhall is “hopeful” he can play this Saturday.