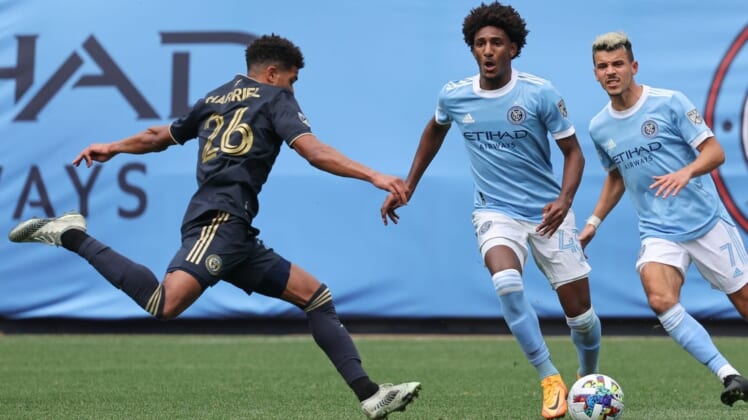 New York City FC head to Chester, Pa., on Sunday to visit the Philadelphia Union trying to keep pace at the top of a crowded Eastern Conference in a nationally televised contest.

Entering the weekend, NYCFC, the New York Red Bulls, Union and Orlando City were separated by two points across the top four spots in the East.

“They will try and control space,” NYCFC interim head coach Nick Cushing said. “They will try and keep us on one side of the pitch so that they can regain the ball centrally and hit us in transition on the counterattack. In moments when we do allow them to have the ball, they’ll be really direct, and they’ll try and play for second balls and they’ll play off set plays.”

NYCFC (8-3-3, 27 points) edged the Union 2-1 when the sides met Dec. 5 in suburban Philadelphia during the playoffs. Talles Magno scored the game-winning goal in the 88th minute to help NYCFC eke past a team missing 11 players due to COVID-19 protocol.

The sides have played once this season. The Union recorded a 2-0 win at Yankee Stadium on March 19 when Alejandro Bedoya and Daniel Gazdag scored in the first half.

The loss was part of NYCFC’s 1-3-1 regular-season start that was sandwiched around six games in the CONCACAF Champions League. Since then, the defending champions are 7-0-2 in their past nine MLS games and produced six straight shutouts before rallying for a 1-1 tie with the visiting Colorado Rapids last Sunday.

NYCFC is coming off another non-MLS game as it dropped a 3-0 decision Wednesday to the Red Bulls in a U.S. Open Cup quarterfinal match.

Philadelphia (6-1-8, 26 points) entered the weekend tied for second place with the Red Bulls, one point ahead of Orlando and three ahead of fifth-place CF Montreal. The Union enter this weekend with a league-leading eight ties and are on an eight-game unbeaten streak (1-0-7) since a 2-1 loss at Toronto FC on April 16.

“It’s a huge match,” Philadelphia coach Jim Curtin said. “It’s the team that won MLS cup last year. It’s a team that’s playing the best in our in our league right now right in terms of recent form. It’s a team that knocked us out of the playoffs on our home field the last time the last time we were there. So all those things weigh into the game with our group.”

The Union kept their unbeaten streak going last weekend when they settled for a 1-1 tie against visiting FC Cincinnati.