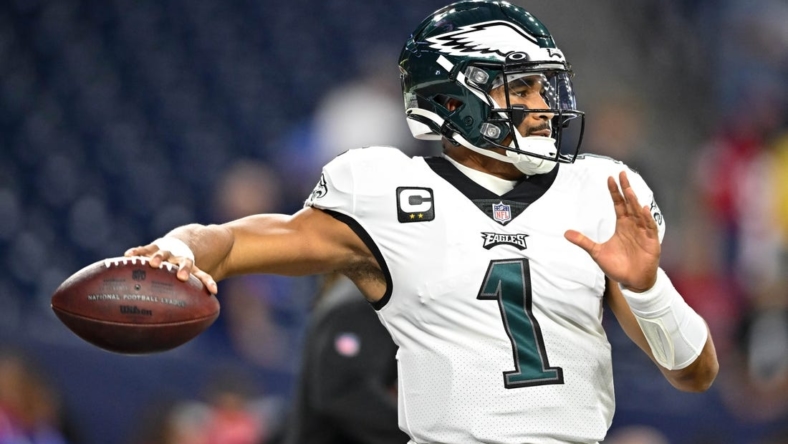 Hurts will look to build on those numbers when the Eagles (8-0) host the Commanders (4-5) on Monday night.

During last season’s successful playoff push, Hurts and Philadelphia defeated Washington in Weeks 15 and 17. The Eagles beat the Commanders 24-8 on the road in Week 3 this season, with Hurts passing for 340 yards and three touchdowns and the defense sacking Carson Wentz nine times.

As the Eagles look to continue the best start in franchise history, Hurts keeps his eye on the big picture.

“I know it’s special for the city of Philadelphia, but I’ve been 8-0 before and lost in the national championship (at Alabama). So just take it day by day,” Hurts said. “We haven’t accomplished anything yet, and it’s a day-by-day thing of us controlling the things we can, playing to our standard and trying to grow every day. I think that’s truly what it’s about.”

Setting aside the “day by day” cliche, Hurts is enjoying a terrific season with career highs in completion rate (68.2 percent) and passer rating (107.8) and just three turnovers (two interceptions, one fumble) on 557 snaps.

“The way he has been playing, the way he goes about his process and his business, it’s tremendous,” offensive coordinator Shane Steichen said. “The guys feed off it. You see it on the practice field, you see it in the meeting rooms, and to carry it over every Sunday and being consistent — that’s what you want in a quarterback, and he’s doing that now.”

The Commanders, now with Taylor Heinicke under center, had a three-game winning streak snapped with a 20-17 home loss to the Minnesota Vikings last Sunday. Washington, which led 17-7 early in the fourth quarter, has held the lead at some point in each of its past six games but is 3-3 in that span.

“It can be feast or famine at times with him,” Commanders coach Ron Rivera said of Heinicke, who is 9-9 as a starter for Washington. “But he’s done the things needed to do to give ourselves an opportunity.”

“A roller coaster ride, man,” Rivera said. “You watch him do the things that he does, when he’s running the operation out there, he’s very confident and makes a lot of good decisions where to throw the ball. A couple times it comes out hot and high, but (he’s played) well enough to give us a chance to win in two of the last three games.”

The only players on Philadelphia’s injury report Thursday were cornerbacks Josh Jobe and Avonte Maddox, who both missed practice with hamstring injuries, and fellow cornerback Josiah Scott (ankle), who was limited.