Apr 20, 2021; Dallas, Texas, USA; A view of a hockey puck and yellow boards before the game between the Dallas Stars and the Detroit Red Wings at the American Airlines Center. Mandatory Credit: Jerome Miron-USA TODAY Sports

The Ukrainian Hockey League has suspended Andrei Deniskin a minimum of three games after the HC Kremenchuk forward made a racist gesture toward HC Donbass Donetsk defenseman Jalen Smereck.

The ban comes with the option of paying a fine of 50,000 Ukrainian hryvnia, which is roughly $1,870. If Deniskin elects against paying the fine, he will receive an additional 10-game suspension.

Smereck, who is Black, announced Tuesday that he would sit out until Deniskin was punished for his actions.

HC Donbass took to social media on Wednesday to demand a different ruling to the matter. 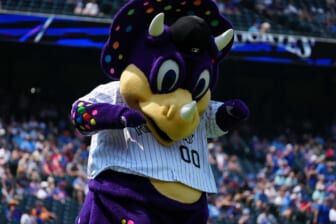 “$1870 for racism?! For racist actions towards Donbass player (Smereck), Kremenchuk player Andrey (sic) Deniskin was disqualified for three matches,” HC Donbass wrote on Twitter. “Deniskin was also given 10 matches of an additional disqualification or fine $1870. We demand a reconsideration of the decision!”

During the second period of a game on Sunday, Deniskin shouted at Smereck and mimicked peeling a banana and eating it. Deniskin was ejected for his gesture and posted an apology on Instagram after the game.