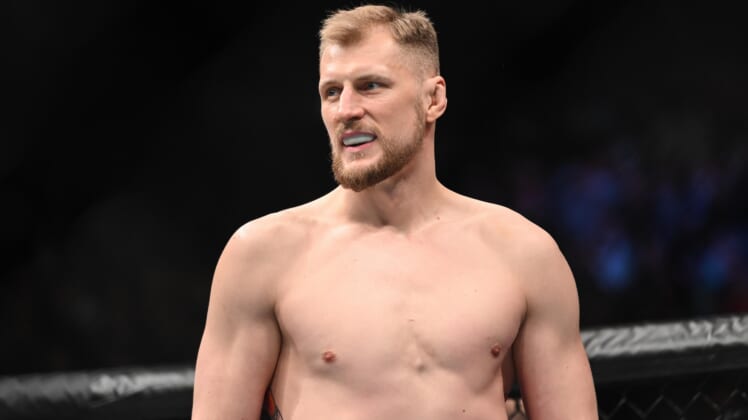 The event was headlined by a major matchup in the heavyweight division. When the eighth-ranked fighter on the Sportsnaut UFC heavyweight rankings, Jairzinho Rozenstruik, battled the man behind him in our top-10, Alexander Volkov. In the end, Mother Russia reigned supreme when Volkov earned a stunning first-round finish.

The card also included the return of rising prospects Erin Blanchfield, Joe Solecki, and Jeff Molina. As well as Octagon veterans Karolina Kowalkiewicz, Dan Ige, and Mike Trizano. Let’s take a look at the fighters that earned monumental victories, and those that had nights they will look back on with regret.

Volkov had 22 knockouts heading into Saturday and he got 23 in destructive fashion against Rozenstruik. If any fighter was expected to go for a takedown or clinch, “Drago” was the betting favorite. However, he closed the distance on his foe, rocked him badly, and forced the stoppage via a striking barrage a little over two minutes into the night’s main event.

After a frustrating opening-round loss to Tom Aspinall at UFC London in March, Volkov bounced back in a major way and kept himself on the outer rim of the title picture.

After winning six straight and vaulting into title contention, Ige has had a tough go of it over the last two years, after losing four of his last five — including on Saturday. His UFC Vegas 56 clash with Movsar Evloev was a chance to maintain relevancy in the top-10. Unfortunately, he came up short in that pursuit. At 30 he has time to reinvent himself, but it will take years before he can return to the relevancy he had in 2020.

Former Jungle Fight featherweight champion Lucas Almeida had a memorable night at UFC Vegas 56. In his first chance back inside the Octagon after coming up short in his 2021 opportunity on Dana White’s Contender Series, he proved too much for Ultimate Fighter Season 27 winner Mike Trizano and stopped the very tough veteran by TKO in the third. If there was any doubt about the Brazilian’s readiness for the UFC, he dispelled that on Saturday night.

When Zarrukh Adashev entered the UFC as a 3-1 flyweight prospect there are certainly some who doubted if he was quite ready for this level of competition. With his UFC Vegas 56 results bringing his Octagon record to 1-3, including two knockout losses, we probably have the evidence the 29-year-old is not prepared to consistently succeed at the highest level just yet. The question now is, will he get a fifth chance to prove himself in the Octagon?

Heading into Saturday, Karolina Kowalkiewicz needed a victory, and bad. The 36-year-old had not won a fight since 2018 and was mired in a five-fight losing streak. Her UFC Vegas 56 results saw her finally get back into the win column. Not only did Kowalkiewicz get the W but she earned the first finish in her 13-bout UFC career and avengers a loss in beating Felice Herrig. Now training at American Top Team and with a win under her belt, the Polish veteran seemingly has a new lease on her Octagon life.

On June 4, Felice Herrig’s 13-year career in MMA came to a close in a disappointing fashion. After battling back from ACL injuries to fight for the first time in almost two years, she was forced to tap for only the second time in her career to Kowalkiewicz. A fighter she had beaten previously. Furthermore, she will end her UFC run on a four-fight losing streak. The Ultimate Fighter Season 20 winner went 5-5 in the Octagon and finished 14-10 overall with four submission wins.

Twenty-four fight veteran Damon Jackson was on the wrong side of one of the biggest highlight knockouts in the 2019 season of the PFL. However, since then he has made MMA fans forget that moment by winning five of his last six, and now three straight in the Octagon. His UFC Vegas 56 results were another showcase of the talented grappler that he is as he was able to control and threaten Dan Argueta on the ground for much of their bout. The 33-year-old is deserving of a name opponent in his next UFC outing.

Zhalgas Zhumagulov’s tenure in the UFC could be at an end. Despite a strong showing, and winning over one of the three judges, he came up short by a split decision to Jeff Molina on June 4. The setback brings his record to 1-4 inside the organization. In most instances, it would seem that the man from Kazakhstan would be headed to the unemployment line next week. However, since he fell short against a top flyweight prospect, who has won 10 straight, Zhumagulov may get one more chance to prove himself in the Octagon.

Blanchfield entered UFC Vegas 56 as one of the biggest favorites on the card, and early on she was meeting some serious resistance from Ultimate Fighter veteran JJ Aldrich. However, in a show of her continued development, Blanchfield was patient, found an opportunity, and pounced to score her third straight win in the UFC. At only 23, “Cold Blooded” is one of the top rising talents in the women’s flyweight division.