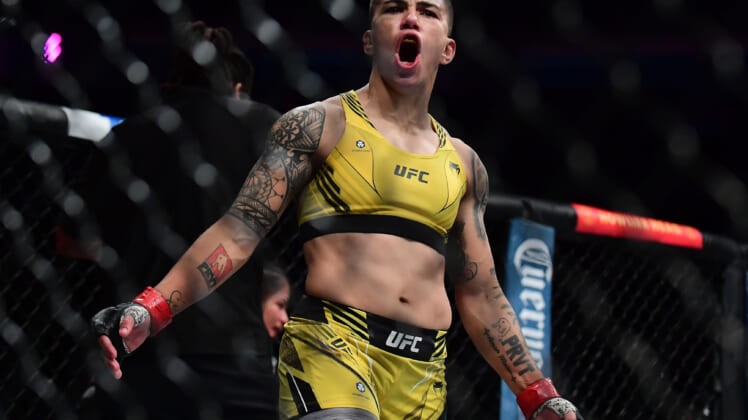 The UFC Vegas 52 results were filled with quite a few impressive fight-ending finishes from the MMA world leader’s event on April 23.

In the main event of Saturday night’s card, top-10 strawweight Amanda Lemos put her hot streak on the line by welcoming back a former queen of the division in fellow Brazilian Jessica Andrade. In the end, the former champ showed her well-rounded talents and scored her first submission win since 2016.

The card from inside the UFC APEX also featured return victories for a couple of competitors making long-awaited returns in Sergey Khandozhko and Tyson Pedro, as well as fights for popular action men, and Octagon stalwarts, Lando Vannata and Clay Guida.

Let’s take a look at the biggest winners and losers from the UFC Vegas 52 results.

Jessica Andrade is back! The former strawweight champ jumped back into the division for the first time in two years and didn’t miss a beat. In defeating a surging top-10 talent in Amanda Lemos — and shockingly by submission — “Bate Estaca” showed she is still a force to be reckoned with at 115-pounds. The Brazilian could very well find herself in the title fight conversation later this year with another win in her next Octagon outing.

Clay Guida had a feel-good moment in December when he surprisingly submitted talented grappler Leonardo Santos. Well, at UFC Vegas 52 he found himself in the same position as Santos when Claudio Puelles made the UFC Hall-of-Famer tap to a kneebar. The “Prince of Peru” has won five straight in the Octagon — three by kneebar — so this loss may not seem so bad if Puelles becomes a contender. Nevertheless, the little momentum “The Carpenter” built late last year has been dashed.

After a shaky start where opponent Lando Vannata seemed to be getting the best of him on the feet in the opening round, Charles Jourdain roared back with a vengeance. Stunning “Groovy” and finishing him minutes later with a near one-armed guillotine. The victory gives him his first winning streak in the UFC, and some solid momentum after beating two very solid talents in Vannata and Andre Ewell in his last two outings.

After an exciting start when he scored a highlight-reel finish over Ike Villanueva in his UFC debut, Jordan Wright has had a steep decline in his UFC performance since. He has now lost three of his last four inside the Octagon. All of the defeats were finishes, and the last two came in the first round — including Saturday by submission to Marc -Andre Barriault. “The Beverly Hills Ninja’s” UFC Vegas 52 results leave him in a perilous position where another chance in the Octagon is far from guaranteed.

Injuries kept Russia’s Sergey Khandozhko out of the cage for two and a half years. But boy, did he reintroduce himself to UFC fans in a memorable way. His UFC Vegas 52 bout was one of the wildest and most entertaining on the card, and in scoring a second-round knockout over the American, “Honda” put the welterweight division on notice.

Tyson Pedro spent three and half years on the sidelines dealing with a knee injury and a botched surgery to repair it. At one point, he was a rising prospect in the promotion until losing two straight fights. In coming back from such a long hiatus, ending his losing streak, and winning decisively over Ike Villanueva, he proved he still has the potential many saw in him back in 2017.

Ike Villanueva is one of the most sincere, good, and real people in MMA, so you have to feel for him following his fifth loss in six Octagon appearances. All of the losses were by knockout. “The Hurricane” spent 12 years on the regional MMA scene before he realized his UFC dreams in 2020. However, his tenure in the promotion is likely at an end far sooner than he would have preferred.

China’s Aori Qileng ended his two-fight losing skid by way of a dominant victory over Cameron Else at UFC Vegas 52. The 28-year-old found himself in a must-win scenario and delivered in a major way with a first-round technical knockout. In avoiding a third straight loss, he kept his job in the UFC and earned the third knockout win in his last four victories.