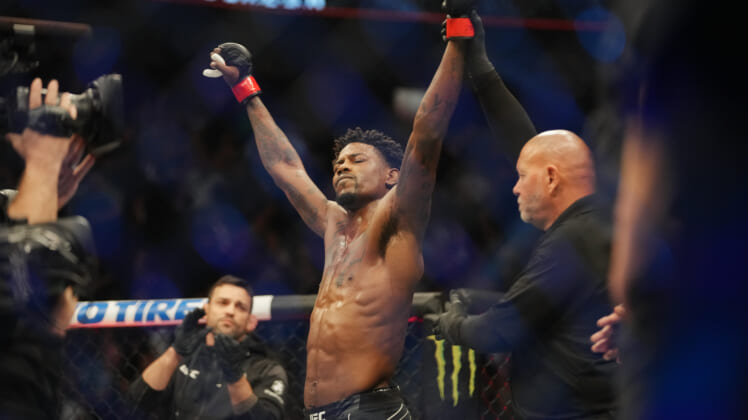 The UFC Austin results featured a bombardment of highlight-reel knockouts as the MMA world leader made its return to Texas.

The June 18 card featured a major matchup in the top-10 of the featherweight division when fourth-ranked fighter Calvin Kattar battled seventh-ranked veteran Josh Emmett. In the end, the 37-year-old Emmett was able to outlast and outpoint Kattar for the biggest win of his career.

The UFC Fight Night: Austin card also included the return of action fighters Kevin Holland, Tim Means, Julian Marquez, Joaquin Buckley, and Adrian Yanez. Let’s take a look at some of the biggest winners and losers from a night of cage violence at the Moody Center in Austin, Texas.

Josh Emmett’s evolution as a striker is one of the more underappreciated stories in the featherweight division, over the last five years. In his bookings with Shane Burgos and Saturday against Calvin Kattar, he was thought to be the lesser fighter on the feet. But he proved his doubters wrong in both instances and now stands on the precipice of a title opportunity in 2022.

At 37, Emmett is his best version and is deserving of facing the winner of champion Alexander Volkanovski vs Max Holloway next.

This is going to be a difficult loss to take for Kattar. There were times in the fight when he seemed a little too patient and it made certain rounds difficult to call. And with those rounds being so close, two of the three judges ended up awarding the win to Emmett. In a second opportunity where he could have earned a title shot with a win, the Boston native came up short. This one will sting more than the last time because he definitely could have done more.

The Kevin Holland at welterweight experiment is turning into the best decision in “Trailblazers” career. After going winless in his last three at middleweight, he has earned back-to-back second-round knockouts against two battle-tested fighters in Alex Oliveira, and at UFC Austin against Tim Means. Following his win, he called for a bout against top-10 talent Sean Brady. The booking makes sense as an elite-level test of if he has really fixed his long-standing wrestling deficiencies.

If Adrian Yanez isn’t the best boxer in the bantamweight division there aren’t many that are better. In his UFC Austin results, he utterly clowned Tony Kelley en route to his fifth straight win in the UFC. The Dana White’s Contender Series contract winner has four finishes in five victories, with two in the opening round. The promotion can end the slow build and give him a name (and ranked) opponent next.

On Saturday, Julian Marquez showed he is even tougher than we realized and has heart for days. Nevertheless, Gregory Rodrigues made him look levels below where he needs to be if he ever wants to compete for the UFC middleweight title. The loss was a striking lesson for “The Cuban Missle Crisis” and halted the strong momentum he had built for himself in 2021.

In 32 career fights, Court McGee has only been knocked out twice. Yet, on Saturday Jeremiah Wells was able to do what talented fighters like Carlos Condit, Sean Strickland, and Robert Whittaker couldn’t and put the uber-durable veteran to sleep. That is damn impressive for a competitor in their third UFC fight. In three Octagon appearances Wells has three finishes, and two consecutive in the first round. He is one to watch for the rest of 2022.

Everybody respects what Eddie Wineland has done in the sport, but at 37 and having lost five of his last six, there isn’t a very good reason for him to still be getting a spot on the UFC roster. He has lost three straight by first-round knockout, and his latest setback to Cody Stamann was the most violent yet. Maybe Wineland doesn’t need to retire, but he doesn’t look to be a UFC-level fighter anymore.

Phil Hawes put an absolute beating on Deron Winn at UFC Austin. While Deron Winn is certainly not on the level of his training partners and coaches, Daniel Cormier and Khabib Nurmagomedov, if it were easy to brutalize him everyone would do it. Saturday was another one of those nights where the impressive talent of Hawes showed through. With four wins in five UFC appearances, the New Jersey native deserves a name opponent next.