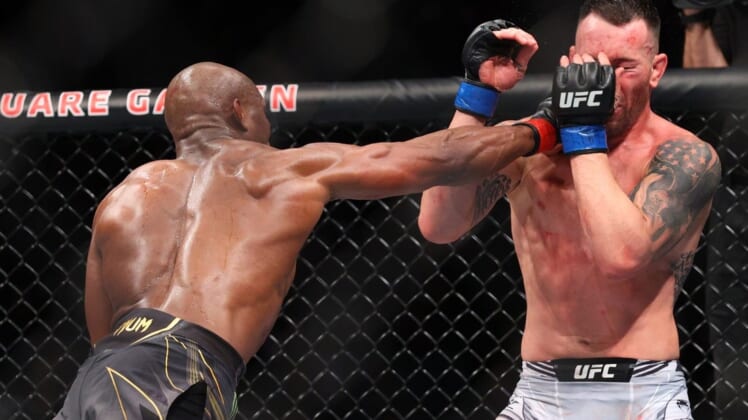 A champion who is encroaching upon record territory makes his next title defense in the main event of Saturday night’s UFC 278.

Kamaru “The Nigerian Nightmare” Usman (20-1) puts his welterweight title on the line against England’s Leon Edwards (19-3) in the featured bout at Vivint Arena in Salt Lake City, Utah.

The Ft. Lauderdale, Fla. resident by way of Nigeria will look to make his sixth successful defense of a crown he won in 2019. Usman, considered by some MMA’s current top pound-for-pound fighter, is undefeated since joining UFC in 2015, winning each of his first 15 fights.

With a victory over Edwards, he would tie legendary former UFC middleweight titleholder Anderson Silva for the longest win streak in UFC history.

Standing in his way is Manchester’s Edwards. This is a rematch of a bout first run in 2015.

Usman, in his second UFC appearance, took a unanimous decision in a matchup that was deep in the prelim cards. That stands as Edwards’ last loss to date, as he has won nine consecutive bouts since, easily outpointing Nate Diaz last time out at UFC 263.

However, Usman is a decided underdog entering Saturday’s fight. Usman is being offered at -350 by BetMGM, where he has drawn 69 percent of the fight handle while Edwards (+275) has been backed by 65 percent of the total bets.

The action has been far more one-sided at DraftKings. Usman has drawn 85 percent of the bets and 78 percent of the handle at -320 to beat Edwards (+265) for a second time.

Heading into the fight, Edwards chattered as if he, and not Usman, won the fast fight.

The most popular bet on method of victory at DraftKings has been Usman to win by decision at -110, while BetMGM reported that Usman by KO/TKO or DQ (+175) has been the most-best prop at its sportsbook.

The second and third-billed bouts on the evening feature a pair of former UFC champions.

It has been rough sledding for both in recent outings. Rockhold has been knocked out three times in four fights dating back to losing the title to Michael Bisping in 2016. Costa (13-2) has lost his past two and hasn’t won since 2019.