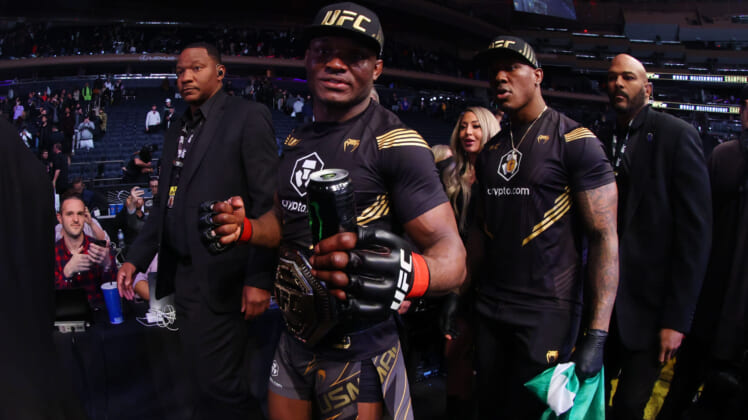 When it comes to the best fighter he has ever had as a client, the manager for UFC 278 headliner Kamaru Usman believes he is so good that his talents even surpass that of another one of his clients in lightweight GOAT Khabib Nurmagomedov.

Usman will compete in the main event of UFC 278 on Saturday night. He will look to defend his welterweight title for a sixth straight time and move his current win streak to 21 straight bouts. If he retired now he would have a legendary career that would put him among the greatest fighters in MMA history and have a case to be considered the best 170-pound fighter in UFC history.

A man that knows a lot about elite-level UFC fighters is Ali Abdelaziz, the head of powerhouse management company Dominance MMA. During an influential run in the sport, he has represented many of the best fighters of the last decade. Competitors like Usman, former two-division UFC champion Henry Cejudo, former interim lightweight champion Justin Gaethje, PFL goddess Kayla Harrison, and UFC lightweight legend Khabib Nurmagomedov.

During a conversation with TMZ Sports on Saturday, Abdelaziz was asked about his list of future Hall-of-Fame clients and if Usman is the best of the bunch. Despite his close relationship with many of them, he couldn’t help but admit “The Nigerian Nightmare” is the greatest that he’s ever worked with and seen.

UFC 278 takes place on Saturday night inside the Vivint Arena in Salt Lake City, Utah. The main card pay-per-view will air exclusively on the streaming service ESPN+ at 10 PM ET.