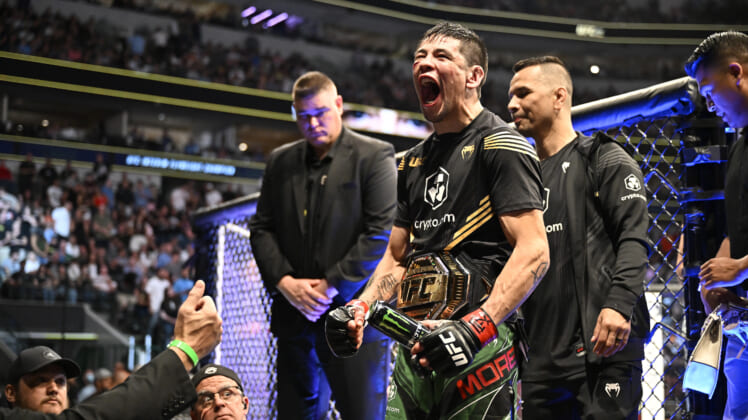 The UFC 277 results offered up some wild finishes and major victories for a couple of the promotion’s biggest names.

The July 30 card from inside the America Airlines Center featured a pair of title fights in the top two spots. In the main event, women’s bantamweight gold was on the line when The Ultimate Fighter Season 30 coaches Julianna Pena and Amanda Nunes faced off in a rematch of their Dec. title bout. In the end, the women’s GOAT earned ice-cold revenge and a dominant decision win to become a two-time champ-champ.

In the co-main event, former flyweight champion Brandon Moreno looked to win an interim belt when he battled top contender Kai Kara-France, in a highly anticipated bout that was also a rematch of their scrap from 2019. Just like their first fight, Moreno proved the better talent but this time he scored a decision TKO victory to win UFC gold for a second time.

The card from Dallas, Texas also saw the return of several UFC veterans and fan favorites in Anthony Smith, Derrick Lewis, and Alexandre Pantoja. Let’s take a look at the biggest winners and losers from the UFC’s final event in July.

Nunes made history again at UFC 277. She is now the first two-time champ-champ in Octagon history. While Pena was very game over five hard-fought rounds and threatened some submissions, “The Lioness” showed why she is the GOAT of women’s MMA. She was better technically, in the striking department, in the game plan, and even on the mat. It wasn’t a perfect performance, but Nunes showcased her unbelievable talent nonetheless.

Pena’s underdog legend is over after just one fight. The scorecards of her loss to Amanda Nunes tell the story of a dominant loss over five rounds. However, the former champion showed there is no tougher and more durable fighter in the sport than her. It is her unique fighting superpower and kept this fight competitive throughout. But on a pure talent level, she is still several pegs below the GOAT.

How can you not love the journey of Brandon Moreno in the Octagon? His UFC 277 results were another instance of what will be a legendary story when all is said and done. As he has gone from prospect to released, to champion, and now champion again. In scoring a TKO win over Kara-France, “The Assassin Baby” showcased why he is an elite flyweight and one of the most complete fighters in the sport.

Next, we will get a fourth go-around versus arch-rival Deiveson Figueiredo to unify the titles and put a final chapter on the greatest series of scraps in 125-pound history.

Alexandre Pantoja was on a mission to make a major statement at UFC 277 and he accomplished his goal. He walked down a talented flyweight in Alex Perez, bullied him, got his back, and made him tap out in a minute and a half. It was one of the most impressive wins of his career, and there is no more deserving competitor for a flyweight title opportunity next than “The Cannibal.”

It could be debated that Derrick Lewis’ TKO loss on Saturday may have been stopped too soon, but nevertheless, there is reason to wonder if “The Black Beast’s” time as a top 10 fighter may be over. He was badly hurt against Sergei Pavlovich and likely would have been finished if the referee didn’t jump in. This is the second straight knockout loss, and just the second time he has been defeated in the first round. Something that would have been shocking to think of not long ago.

If Lewis’ chin is starting to fail him, and he is becoming an easier target to hit, he may begin a fast fall from the elites of the heavyweight division.

Over his 19-fight UFC career, Drew Dober has proven one thing more than any other, he is always in one of the most exciting scraps on any card he is on. He showed that once again in Dallas with his barnburner against Rafael Alves. While Alves was game over the first two rounds of the fight, a ribs-crushing body shot from Dober earned him the twelfth KO of his career. It also was a second straight victory after another action-packed win against talented prospect Terrance McKinney in March.

Anthony Smith is a highly-respected fighter, a former title challenger, and one of the most experienced competitors on the UFC roster. However, he is not your average 34-year-old because of the 53 fights he’s had over a long career in the sport. And in his UFC 277 results, his body, unfortunately, failed him. It is unclear when it happened, but Smith broke his leg — likely on a checked kick — at some point in his loss to Magomed Ankalaev.

It’s a disappointing setback for “Lion Heart” not only because it ends his three-fight win streak, and pushes him far out of title contention, but it could be an early sign that the wear and tear of a 14-year career may make it difficult to stay competitive in the future.

A lot of fans will think of Drakkar Klose as the guy who got injured by a staredown push from Jeremy Stephens last year. However, he has done a pretty good job of changing that narrative with back-to-back wins, including his UFC 277 results. While he may never be a contender, he is a legit fighter at lightweight, and having won five of his last six solidifies that fact. As well as proves how deep the division is.

Don’Tale Mayes seemed to have righted the ship of his career with back-to-back wins recently after starting his UFC career with two straight losses. However, despite facing a UFC newcomer who took the fight on short notice, and having Hamdy Abdelwahab on the verge of being finished in the second round, Mayes saw his win streak end on Saturday night. “Lord Kong” had the chance to elevate his status in the division at UFC 277 and instead proved he needs more work before ever being considered as a top-15 fighter.

Michael Morales was in the featured bout on the early prelims portion of UFC 277 and showed why hype behind the 22-year-old prospect and Dana White’s Contender Series contract winner. While UFC debutante Adam Fugitt gave a solid effort and had a strong first round against the Ecuadorian, Morales showcased the power that has earned him knockouts in 77% of his wins by getting a second-round technical knockout. He is now 2-0 inside the Octagon and is a fighter to watch at welterweight.