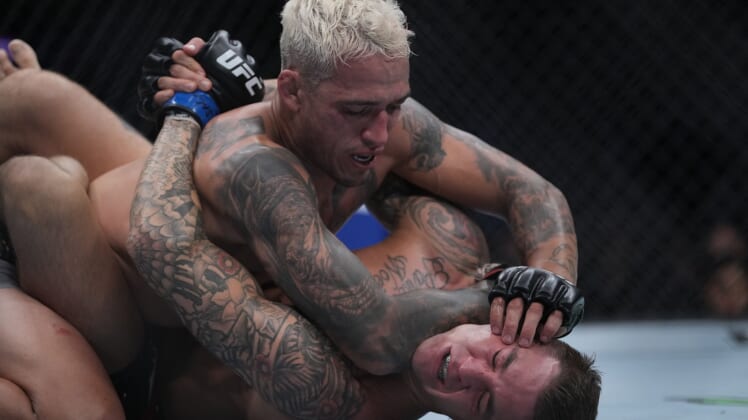 Charles Oliveira cannot reclaim the lightweight title on Saturday night but remains heavily favored to deny Justin Gaethje from claiming it at UFC 274 in Phoenix.

Oliveira (32-8) was stripped of the title after failing to make weight on Friday. The fight will go on, but the Brazilian will not be able to reclaim the title on Saturday despite being the -180 favorite at DraftKings and the -150 favorite at BetMGM.

Oliveira owns the UFC records for most finishes (18) and most submission victories (15), and he rides a 10-fight winning streak into the bout. However, the title will remain vacant if he beats Gaethje.

Gaethje’s reputation is underscored by the fact he has earned 10 of UFC’s “Fight of the Night” and “Performance of the Night” bonuses in his first nine UFC fights. He’s the winner of five out of his last six.

For his part, Oliveira says he knows Gaethje can bring it, and he’s ready to fight fire with fire.

“Listen, he is a truck,” Oliveira said at Wednesday’s media day. “He only moves forward; I only move forward. So, there’s definitely gonna be collisions, definitely gonna be a clash. I’m not a jiu-jitsu fighter anymore. I’m a complete MMA fighter. I want everyone to know.”

The evening’s co-feature is a killer rematch for the UFC strawweight title between champion Rose Namajunas (11-4) and former titleholder Carla Esparza (18-6).

In December 2014, Esparza defeated Namajunas in the finals of a tournament to crown the UFC’s first 115-pound champion. That was Namajunas’ fourth career pro fight, underscoring her potential.

She has since lived up to that hype by becoming the division’s first two-time titleholder, using a well-rounded offense and underrated toughness to impose her will.

Esparza, meanwhile, dropped the title in 2015 and for a while was considered an afterthought in the division. But the wrestling-heavy Esparza has vastly improved her stand-up game and has won five consecutive fights over the past three years to earn her way back to another title shot.