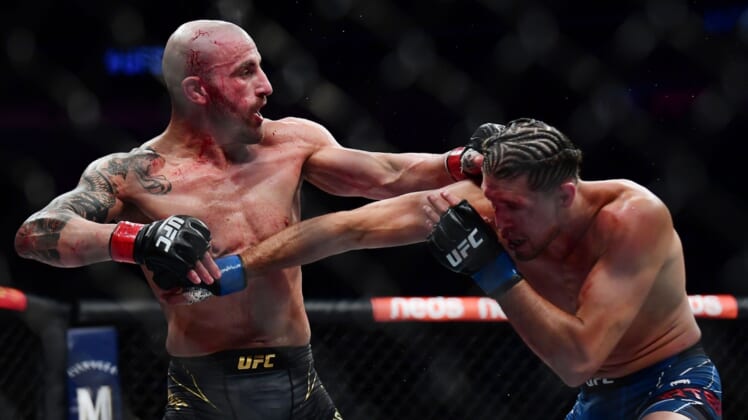 A pair of title fights top the bill at Saturday night’s UFC 273 at VyStar Veterans Memorial Coliseum in Jacksonville, Fla.

Volkanovski is the heavy favorite at -800 by BetMGM, but the action has been overwhelmingly in Jung’s favor with 89 percent of the fight tickets and 92 percent of the handle.

The co-feature is a grudge rematch and featherweight title unifier between UFC bantamweight champion Aljamain Sterling (20-3) of Long Island, N.Y., and Russia’s Petr Yan (16-2). Yan is the -500 favorite but has drawn only 16 percent of the bets and 22 percent of the handle.

Volkanovski brings a 20-fight win streak into the bout, which includes all 10 of his fights in the UFC and both of his successful championship defenses. Boasting killer cardio, crisp striking and underrated wrestling, the champion seems on the brink of settling into a lengthy reign.

Jung, meanwhile, is a popular longtime competitor who earned the nickname “The Korean Zombie” for his ability to wade through anything his opponent can dish out, which has made for a long string of exciting fights. He’s won three of his past four, and while he’s a major underdog, he’s a live one and considered capable of changing any fight with a single punch.

Fair or not, the perception heading into the evening’s co-feature among the majority of fans is that Yan is a clear-cut better fighter than Sterling. The duo first tangled last year at UFC 259, in what was then-bantamweight champion Yan’s first title defense. Yan was utterly dominating all aspects of the fight when he inexplicably and intentionally drilled a downed Sterling in the head with an illegal knee, rendering him unable to continue.

Sterling thus became the first fighter in UFC history ever to win a title via disqualification.

When Sterling had to pull out of a scheduled rematch due to a neck injury, Yan went out and schooled rising contender Cory Sandhagen to win an interim title, which only fueled talk that Yan remains the “real” champ — as of midweek, Yan was a -475 favorite, according to DraftKings.